Alessandro Gallo’s For Some Reason

I don’t know if the Bloodhound Gang song “The Bad Touch” was popular in Alessandro Gallo’s native Italy, but gazing upon his For Some Reason (2016) solo exhibition’s stoneware sculptures makes me think of that track. I’m referring, of course, to the main chorus of the piece, the stanza “You and me, baby, ain’t nothin’ but mammals; So let’s do it like they do on the Discovery Channel”, which carries within the juvenile expression the knowledge that humans should remember that they are simply animals. With Gallo’s vision, we are reminded of the same fact though through almost humorous evolutions of the animal kingdom, their bestial heads proudly residing upon human bodies.

Collectively calling his hybrid creatures Strani Incontri (Strange Encounters), Gallo’s creations are reflections of the minutiae of mankind’s daily life, each roughly one-and-a-half to two-foot tall piece being imbued with a personality and expressiveness all too familiar to us city-dwellers. And while it is easy to focus on each piece’s head, it is more important to view their hearts.

One must assume that “the road” referenced in this piece’s title is the path of parenthood, one of the most challenging and rewarding routes in life one can take (or so I’ve been told). Clenching his newborn chick-child tightly, this rooster-headed man exudes love and tenderness for his offspring. And the stance of this figure, the slight arching of its back, speaks volumes about how precious the child is, carefully balancing it on his chest.

Stopped on the red carpet, waving to their adoring fans and eliciting a photo op, this pair of puffin-people are easily dismissed as part of the popular culture that we covet but can’t relate to. But look closely at them, specifically how their hands grasp one another. There is a universal sense of having found one’s other half here. And no matter how many people gaze on, for them it is truly always a Cocktail For Two.

I Don’t Want To Grow Up

While I can’t hear the phrase “I don’t wanna grow up” without completing the ad jingle with “I’m a Toys’R’Us kid”, this reptilian-man isn’t a perma-child. But he’s certainly the sort of person we’ve frequently seen in modern society, someone trapped in their rebellious teen phase. Sporting a double ear piercing and wonderfully wrinkly button-up shirt, I find the two Japanese-inspired tattoos to be highlights on this piece; each arm’s sleeve painted in a muted enough manner to remain completely recognizable while still implying works that have faded with age.

There’s something woefully appropriate about Jesse – The Veteran, his ram’s head perfectly adorning the aged yet still fit body of an ex-military man. Towering over the other pieces at its two-and-a-half foot tall height, it’s made more imposing by the visible ease it feels wielding a baseball bat. Yet, at the same time, the animal’s face exudes a peacefulness, its unblinking doe eyes remaining wide open. And the slightly broken tip of its left-hand horn, a barely noticeable aspect, is carried like a truly old war wound.

Carefully clenching the excess size of her t-shirt on the backside, making the front — especially at her breasts — a bit more taut, we all know this girl. Or, should I say, woman. Clinging to a youthful facade, attired in a schoolgirl’s short skirt, knee-high socks, and rainbow adored “awesome” t-shirt, the sheer number and faded nature of her tattoos relay her non-teen age. Caught in a deceptive photographic act, she models before a mirror and finds the best pose for her selfie. And while the title of this work, Follow, can certainly allude to her desire to gain more followers on social networks, it likewise harkens to her duck-headed nature, instinct telling her to migrate in a v-formation behind a single leader.

There’s a duality to the word “briefs” that we rarely ponder, meanings which this work either consciously or subconsciously juxtapose. On the one hand, briefs refer to this businessman-monkey’s underwear, clearly visible around his ankles and almost forgotten in the half-finished act of undressing. Conversely, the word can also indicate the project briefs that the character is scouring over, unable to leave work at the office. Captured in a perfectly relaxed stance, the vulnerability we feel for nude (or semi-nude) sculptures is inherent, though magnified here by the almost voyeuristic nature of seeing this character mid-disrobing.

Gallo creates his sculptures by first taking photographs of human models and then referencing wildlife books for the bestial aspects, finally bringing his mental still image to three-dimensional life. And, as such, this work can be seen as a strange self-portrait, the bird-headed artist herein laboring on a natura morta (or still life), the word morta (meaning dead) given greater gravitas as the artist renders a bird skull. A brilliant touch being the transformation of the typical image of a twig grasped in the beak into that of a paintbrush, eluding to the iconic representation of a painter holding a currently unused brush in their mouth.

A portly buffalo-man, Chris reaks of typical blue-collar Americana. With a biker wallet’s chain draped over his blue jeans, layering a thin jacket over flannel shirt and Elvis Presley adorned tee, this character is an amalgalm of enduring styles from the last fifty years. Completed with the perfect choice of animal, immediately evoking thoughts of the song “Home on the Range” and its heralding to the American West, “where the buffalo roam”.

An obvious play on the multitude of fasion forward and affluent housewives that clutter reality TV, this middle-aged character is adorned in her immaculate pink tracksuit while sporting perfectly painted toenails. Slinging a bevy of shopping bags at her side, there is a rather dark underbelly to this piece’s concept. Titled Whatever after the dismissive term, the cockatoo — who’s head adorns this body — is a bird primarily kept as a pet due to its pretty appearance, solidifying this figure as depicting a “trophy wife”.

His solitary nature precludes him from being social, his stagnant stance denotes a lack of activity, and his singularity prevents him from being part of a swarm, so why exactly is this work titled Social Activist – Locust Swarm? Look carefully at this grasshopper-headed man and you’ll note that his left hand disappears into his pants, implying the activity of masturbation being undertaken. Which, in turn, implies that the computer he is fixated on is displaying pornographic material, adding at least two more unseen locust-people to the piece. While commentaries on how mankind is retreating more and more into the digital realm are frequent, this hybridized form brings a disturbingly fresh voice to the argument.

Titled after the yoga position that the character is undertaking, the Eagle Pose, there is an obvious connection of one trying to better oneself; just as the slightly out of shape woman’s body strives for fitness through yoga, the parakeet aspect emulates the majesty of an eagle. Of further note is that this pose, also known as Garudasana, gains its name from the mythological Hindu “king of the birds”, Garuda, making a bird-headed person the perfect subject for this piece. 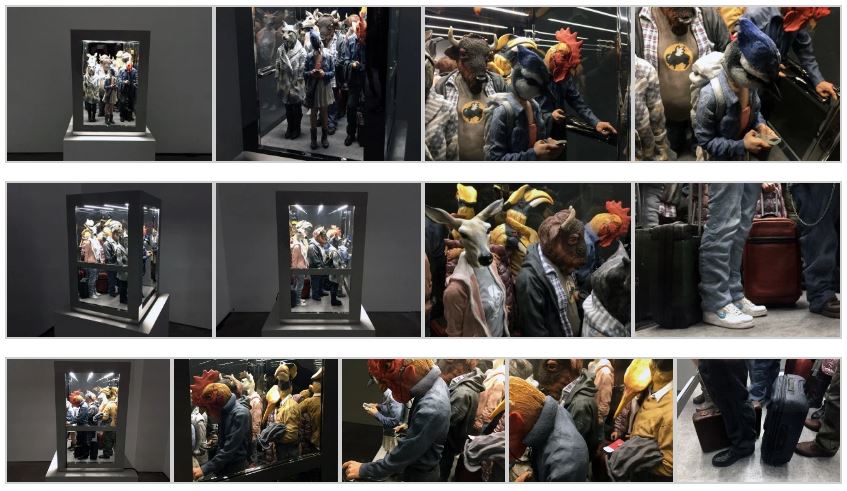 Depicting an assortment of the artist’s animal-headed humans, each with their own unique traits as well as similar aspects, the final work from Gallo’s exhibit, the massive Elevator, has been displayed in a room on its own. While I’d never previously considered it, this work conveys the concept that every time you enter an elevator, you are — in essence — becoming part of a petri dish, a tiny ecosystem contained within the packed machine. As you inspect the positioning of Gallo’s characters within the elevator as well as how they preoccupy themselves during the ride, terms like predator and prey become meaningless; it is strictly their humanity that shines through.

MEET THE ARTIST: ALESSANDRO GALLO If you were an animal, what would it be? The Donkey. He’s proverbially stubborn, stupid…