The Shape of Things to Come

NEW YORK, NY (January 3, 2017) — Jonathan LeVine Gallery is pleased to present The Shape of Things to Come, our annual winter invitational featuring work by emerging talent making their JLG debut alongside artists who have previously shown at the gallery.  Exhibiting artists include:

In what will be JLG’s final group show in New York City before relocating to Jersey City in February 2017, The Shape of Things to Come is comprised of work that represents the future of the gallery, as well as contemporary art.  After twelve years of exhibiting avant-garde work in the Chelsea gallery district we’re excited to bring the same cutting edge aesthetic and ethos to uncharted territory, with this exhibition serving as a retrospective of our evolution and a preview what’s to come.

Armando Veve was born in 1989 in Massachusetts and is currently based in Philadelphia, Pennsylvania.  In 2011, he received a BFA with honors from the Rhode Island School of Design.  His work has been exhibited throughout the United States and commissioned by The New York Times, VICE, WIRED and many other publications.  In 2017, he’ll receive two Gold Medal awards from the Society of Illustrators for his editorial and advertising work.

Ben Venom graduated from the San Francisco Art Institute in 2007 with a Master of Fine Arts degree. His work has been shown both nationally and internationally, including at the Levi Strauss Museum (Germany), the National Folk Museum of Korea, the Japanese American National Museum (Los Angeles) and the Craft and Folk Art Museum (Los Angeles). His work was included in the November 2011 issue of ARTFORUM Magazine and was most recently featured in Playboy and the CBS Sunday Morning News.

Chris Berens was born in 1976 in the historic Netherlands city of ‘s-Hertogenbosch and is currently based in Amsterdam.  In 1999, he graduated from the Academy of Art and Design in his hometown with a degree in illustration.  His work has been shown both nationally and internationally, in cities such as Amsterdam, New York, Seattle and Tokyo.  In 2014, a documentary about his life, Chris Berens, Master of his Magical Universe, aired on Avro, the Dutch public broadcasting network.  Four limited edition monographs of his work have been released, most recently Mapping Infinity (2011).

Jaime Brett Treadwell was born in a suburb of Philadelphia, where he is currently based and works as an Assistant Professor of Art at Delaware County Community College.  In 1999, he completed his undergraduate education at the State University of New York at Cortland and earned his MFA from the University of Pennsylvania in 2002. Treadwell’s work has been exhibited both nationally and internationally, in cities such as New York, Miami, South Korea, Vancouver, San Francisco, Dallas, and Chicago.

Jasmine Becket-Griffith was born in 1979 and is currently based in Celebration, Florida. Her designs appear on many lines of licensed merchandise, most notably through the chain store Hot Topic. Since 2006, she’s created artwork for the Walt Disney Company and is also a staple at fantasy conventions, namely Dragon*Con, MegaCon and FaerieCon.

Jeffrey Gillette was born in 1959 in Detroit and is currently based in Orange County, California. Upon serving in the Peace Corps he moved to California and earned his MFA from Cal State Fullerton.  His work has been exhibited throughout the United States and is featured in the collections of Henry Winkler, Wayne Thiebaud and the Museum of Contemporary Art (North Miami).  In 2015, he assisted Banksy with Dismaland, a temporary art project located three hours outside of London that was a sinister twist on Disneyland and, in part, inspired by Gillette’s paintings.

Lee Chen-Dao was born in 1982 in Taiwan, where he is currently based, and received an MFA from the National Taiwan Normal University.  From 2004 to 2009 he refined his craft while travelling Los Angeles, London, Paris, Beijing, Singapore, New York and San Francisco.  His work has been shown in solo exhibitions throughout Taiwan.

Nigel Cox was born in 1959 in Ireland and is currently based in London.  Upon graduating from Riversdale College of Technology in Liverpool he joined the Transglobe Expedition, a three-year journey that successfully achieved the first circumnavigation of the globe on land, sea and ice via North and South poles.  On this influential trip that he began painting and illustrating for his diary. His work has been shown both nationally and internationally, in cities such as Austria, Greece, London and New York.

Sam Gibbons was born in 1980 in Youngstown, Ohio and is currently based in Baltimore, Maryland. His colorful, painted cartoons explore dark themes, subverting the notions of innocence and moral value in children’s entertainment. Painting on wood or MDF panels with custom-cut outer edges, Gibbons frequently paints symmetrical imagery, of which he has said, “The mirroring of the sides puts all that chaos into a structure and the painting almost becomes about shape and pattern rather than content.”

Paolo Del Toro was born in the United Kingdom and is currently based in Lancaster, Pennsylvania. His felt sculptures combine realism with a grotesque cartoon aesthetic, resulting in works that depict bizarre, sometimes nightmarish faces and figures, yet still have a strangely inviting texture.

Peter Ferguson was born in Montreal in 1968 and graduated from the Ontario College of Art and Design in 1992.  He began his career as a professional illustrator for clients such as Marvel Comics, The Royal Shakespeare Company, The Wall Street Journal, Washington Times, Dow Jones Magazine, Chicago Tribune, Business Week, Los Angeles Times and Prentice Hall.  His work has been exhibited in Los Angeles and throughout Canada. 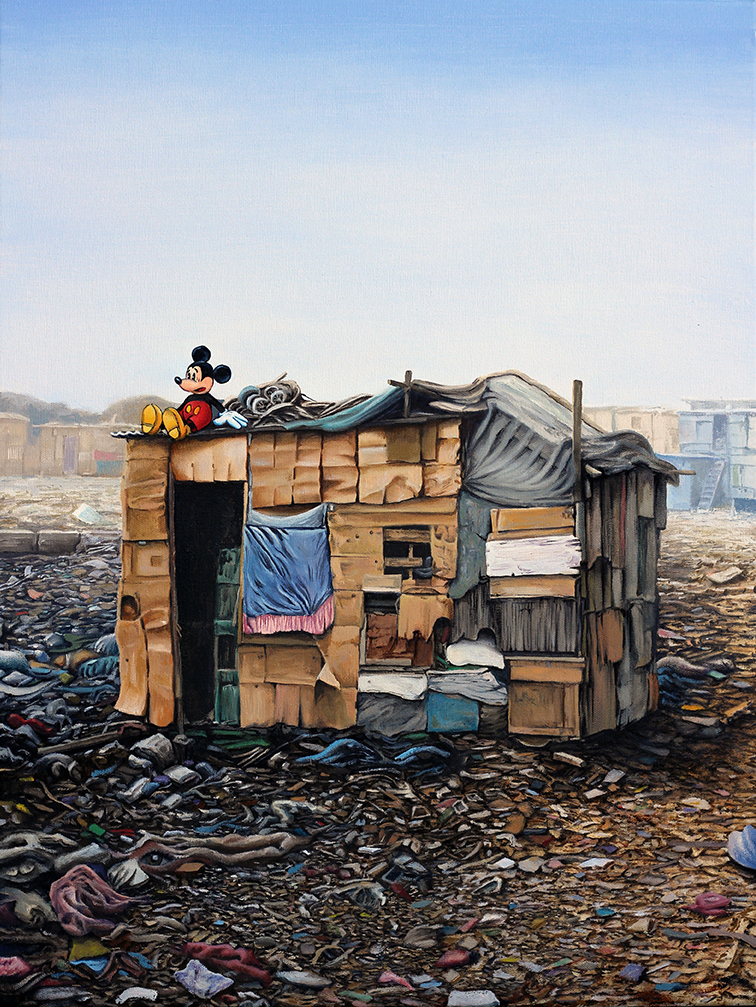 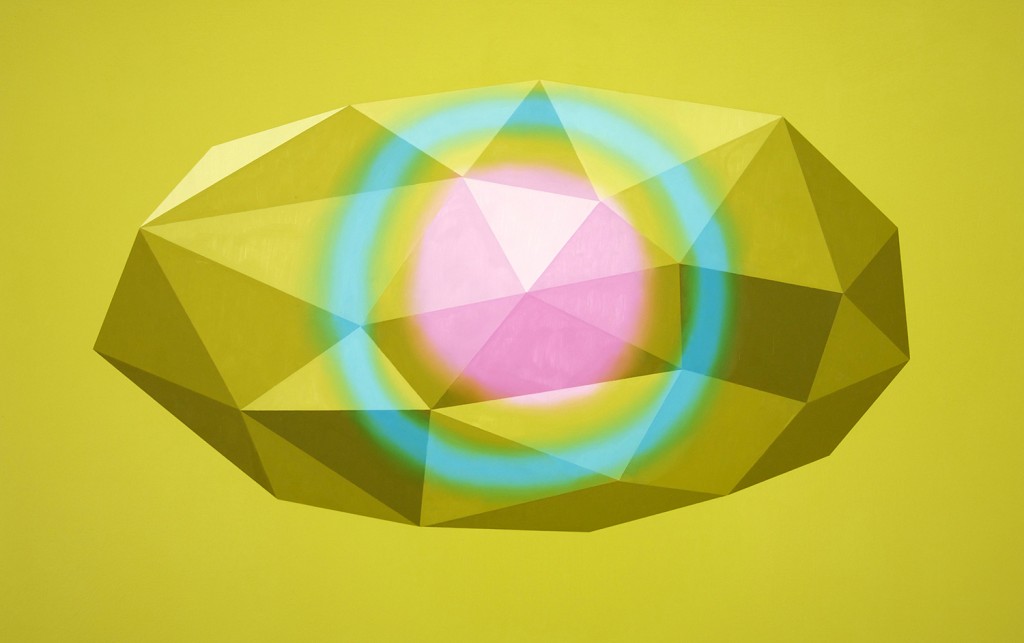 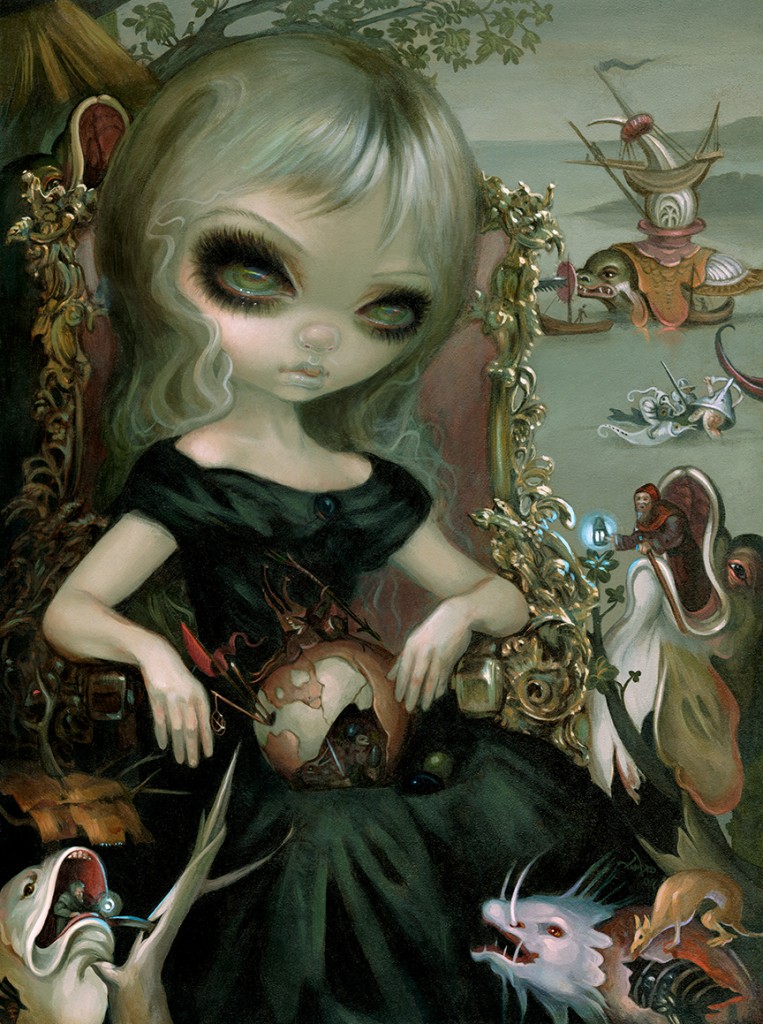