ABOUT THE ARTISTS
Ashley Wood was born in 1971 and is currently based in Perth, Australia. He’s an award winning illustrator who got his start in the international comic book world before breaking into the U.S. market, working for companies such as Marvel and DC. Wood is highly regarded for his fine art work in a variety of mediums, including oil and acrylic painting and sculpture.

Augustine Kofie was born in 1973 in Los Angeles, California, where he is currently based. Merging his traditional graffiti education with his deep love of illustration and architectural renderings, Kofie plays with form, line, balance and depth, twisting and manipulating his compositions into a new and dramatic form of abstraction. His street art is internationally recognized and he’s exhibited his works in galleries across the United States, as well as in France, Mexico, Morocco and Tokyo.

Ben Tolman is currently based in Washington D.C. In 2005, he received his BFA from the Corcoran College of Art and Design and an MFA from American University in 2012. Tolman has exhibited internationally and was a finalist in the Outwin Boochever Portrait Competition at the Smithsonian National Portrait Gallery.

Ben Venom graduated from the San Francisco Art Institute in 2007 with a Master of Fine Arts degree. His work has been shown both nationally and internationally, including at the Levi Strauss Museum (Germany), the National Folk Museum of Korea, the Japanese American National Museum (Los Angeles) and the Craft and Folk Art Museum (Los Angeles). His work was included in the November 2011 issue of ARTFORUM Magazine and was most recently featured in Playboy and the CBS Sunday Morning News.

Brett Amory was born in 1975 in Chesapeake, Virginia and is currently based in Oakland, California. In 2005, Amory received a BFA from Academy of Arts University in San Francisco. In 2012, he was named Artist of the Year by The San Francisco Bay Guardian. In 2016, The Ft. Wayne Museum of Art (Indiana) presented Fort Wayne, American Monologue: A new body of work and installation by Brett Amory.

Dennis McNett was born in 1972 and is currently based in Virgina. He’s been carving block prints for over eighteen years and has shown at galleries around the world, including the Victoria and Albert Museum in London. In 2015, his solo exhibition Legend of the Wolfbat opened at the Ft. Wayne Museum of Art (Indiana). He’s been featured in The New York Times, Houston Chronicle and NPR.

Dylan Egon was born in 1966 in New York City and is currently based in Jersey City, New Jersey. He studied Anthropology and Archeology at Spring Hill College in Mobile, Alabama and later studied Film at City Tech University in New York. Egon works in a variety of mediums and often uses objects from his vast personal collection as focal points in his work. In 2015, his work was featured in a Chanel Beauty editorial in NO TOFU Magazine.

Hellbent is a Brooklyn-based street artist known for his vibrant use of color and pattern in abstract paintings. His studio practice evolved out of a formal arts education and an early love of street art growing up in the South. In addition to gallery shows throughout the US and Europe, Hellbent continues his street practice with numerous large-scale murals and public commissions.

Jeremy Fish was born in 1975 in Albany, New York and is currently based in San Francisco, California. In 1997, he received a BFA in Interdisciplinary Studies from the San Francisco Art Institute. He went on to work commercially as an illustrator, designer, and art director, contributing to apparel companies and magazines like DLX, Think, Thrasher, Juxtapoz, and Slap. His artwork has been exhibited in galleries and museums around the world while also maintaining a commercial presence by designing skateboards, t-shirts, vinyl toys, periodical illustrations and sneakers. In 2015, he was named San Francisco City Hall’s first Artistin Residence and created a series of work inspired by the city’s history.

John Jacobsmeyer was born in 1964 in Ann Arbor, Michigan and in currently based in New York City. He received a BFA from the University of New Hampshire and an MFA in painting and printmaking from Yale University. He teaches printmaking, painting and art theory at the New York Academy of Art’s Graduate School. Awards include two fellowships from the New Hampshire State Council on the Arts, the Basil Alkazzi Award, a Pollack-Krasner Grant and a New York Foundation for the Arts Artist Fellowship. His work is included in the permanent collections of the Anderson Museum of Contemporary Art (New Mexico) and the Springfield Museum of Art (Ohio).

Nick Walker was born in 1969 and is currently based in the United Kingdom. He emerged from the infamous and ground-breaking Bristol graffiti scene of the early 1980s. In 2008 he had sellout shows in LA and London, where collectors queued for over 24 hours to be among the first to get his latest print edition. In 2008, his iconic Moona Lisa sold over ten times its estimated value at auction at Bonhams. His work was featured on the front page of the Independent arts magazine and the Observer’s round up of the year’s biggest events of 2008.

Shepard Fairey was born in 1970 in Charleston, South Carolina and is currently based in Los Angeles, California. He received a BA from the Rhode Island School of Design in 1991. Fairey designed the iconic “Hope” graphic of Barack Obama used during the 2007-2008 presidential campaign, which was acquired by the Smithsonian National Portrait Gallery the following year. In 2009, a mid-career survey of Fairey’s work was the subject of his first major museum exhibition at The Institute of Contemporary Art in Boston. Fairey’s work is included in the permanent collections of the Victoria and Albert Museum, London, the Los Angeles County Museum of Art and the Museum of Contemporary Art, San Diego. 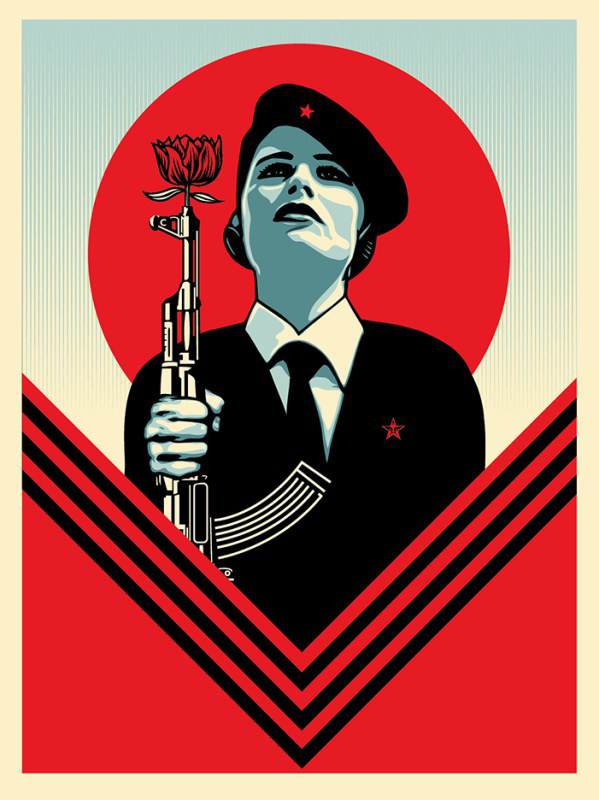 Peace Guard 2 (Artist Proof of sold out edition of 450) 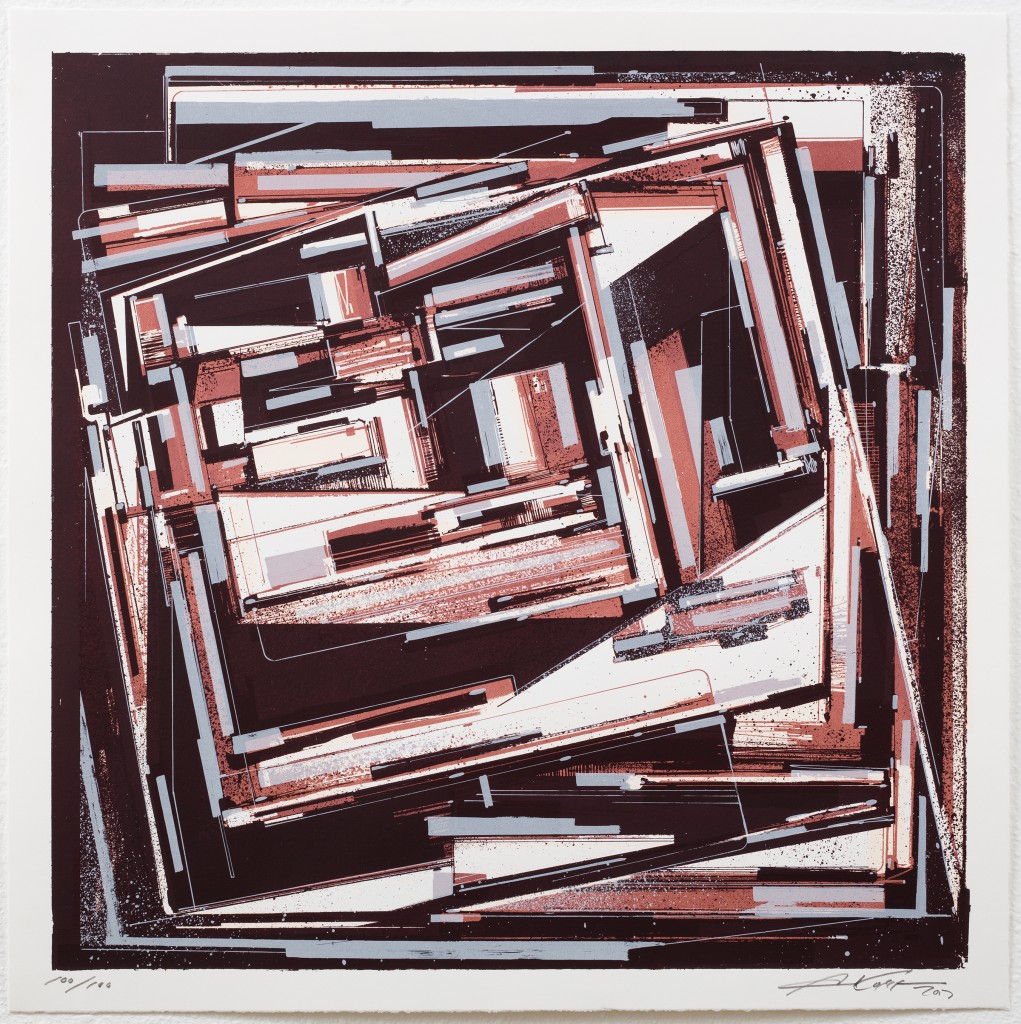 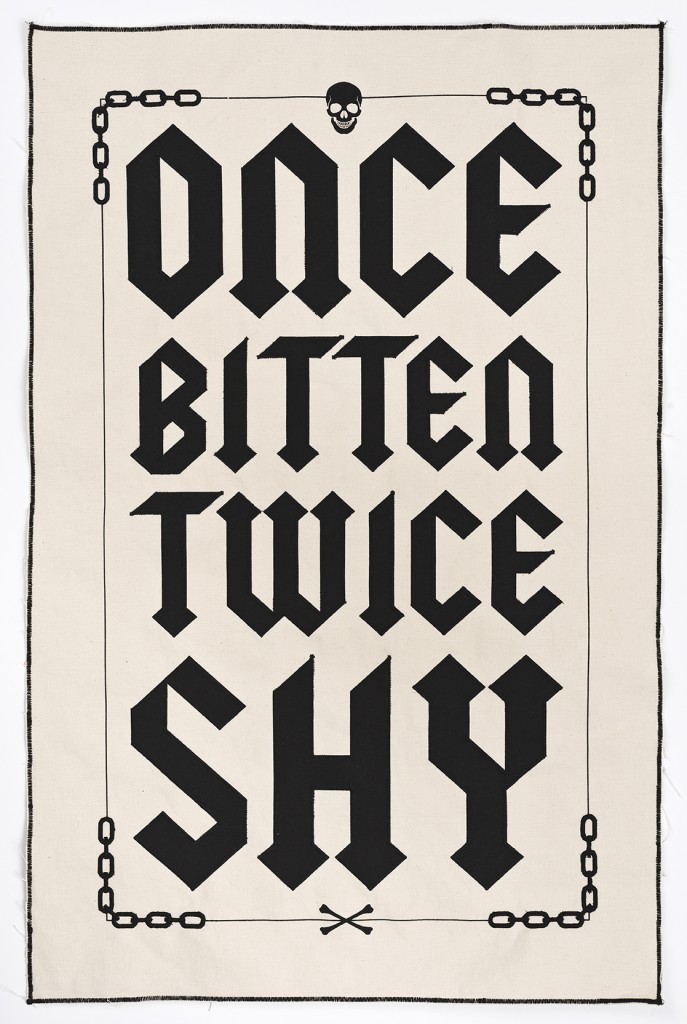