Diana Carolina Lopez was born 1982 in Mexico City, where she is currently based. In 2006, she graduated with a degree in graphic design from the University of Valle de México in Querétaro and went on to study drawing and painting at the Institute of Arts and Crafts of Querétaro. Lopez had her debut solo exhibition in 2015 at Stations in Virtue (Mexico). In 2017, she was selected for Delusional: Jonathan LeVine’s Search for the Next Great Artist, for which she received an honorable mention.

Jeff Gillette’s paintings examine the aesthetic structures and visual patterns of human settlement, specifically that of shantytown style slums in India and South America. To the artist, there is something ineffable behind the obviously chaotic and desperate appearance of these places — a universality of human spirit and a strange beauty which comes out of the necessity and raw honesty of the will to survive. Despite the seriousness of his observations, Gillette sees ironic and amusing juxtapositions that occur when Disney, corporate logos, and pop icons from consumer culture appear as building blocks of shanty settlement construction. His works reflect these ironies as well as add a playful dimension to art historical relationships.

Jeremy Geddes was born in 1974 in Wellington, New Zealand and is currently based in Melbourne, Australia. He studied painting at The University of Melbourne, Victorian College of the Arts, receiving a BFA in 1995 and an MFA in 1997.

Jim Salvati was born in 1975 and has spent his entire life in Southern California. He graduated from the Art Center College of Design in Pasadena, California, where he currently teaches. Along with his fine art career, Salvati works in the film industry as a Visual Concept Designer and Cinematic Artist and is in a select group of painters for Disney Fine Art. He’s responsible for many of the finished paintings in the Harry Potter film series. His collectors include Warner Bros., Sony Pictures, Fox Pictures and Radio City Music Hall. In 2017, Salvati was selected for Delusional: Jonathan LeVine’s Search for the Next Great Artist, for which he received an honorable mention.

Julia Ibbini is a digital and mixed media artist based in Abu Dhabi in the United Arab Emirates. She is of dual-nationality (Jordanian-British) but has spent most of her life in the UAE. Her work combines contemporary digital design and traditional craftsmanship with extreme intricacy to create pieces that articulate themes of identity, place and belonging. In 2017, she was named the second place winner of Delusional: Jonathan LeVine’s Search for the Next Great Artist.

Kevin Cyr was born in 1976 in Edmundston, New Brunswick, Canada and grew up in Madawaska, Maine. In 2000, he received a BFA from Massachusetts College of Art in Boston. His paintings, drawings, sculptures and installations have been exhibited by galleries and museums internationally. His work is included in the permanent collections of La Fondation d’Art Oxylane in Lille, France and the West Collection in Oaks, Pennsylvania. Cyr’s work has been featured in publications such as Desillusion Magazine, Juxtapoz Magazine, Huffington Post and The New York Times.

Kip Omolade was born in Harlem, New York and began his art career as a graffiti artist while interning at Marvel Comics and The Center for African Art. He continued his studies at The Art Students League of New York and earned a BFA at the School of Visual Arts. His work has been exhibited in galleries around the world and on Good Morning America, Juxtapoz, Huffington Post and Hi-Fructose. Special projects and partnerships include collaborations with Sony Music, Red Bull and Nike. His work was also featured on the album cover of R&B recording artist Fantasia’s latest release “Definition of…Fantasia”. Viacom exhibited and acquired his painting Diovadiova Kitty Cash V, which was a tribute to New York City.

Prefab77 (aka Peter Manning) is a British artist currently based in the United Kingdom. He started his career as a printmaker and designer for Her Majesty in the British Army. He continued working as a designer for well-known fashion brands while also organizing exhibitions at Electrik Sheep Gallery for street artists such as Banksy, Eine, Eelus and Pure Evil. He’s exhibited at galleries throughout the world, including Canada, Detroit, Ibiza and San Francisco. His work has been commissioned by Converse, Gap, Hurley, NIKE, Keds, and Ride Snowboards. In 2011, he created the cover art for Dancing Backward in High Heels, fifth and final studio album by the New York Dolls.

Ronald Gonzalez is a contemporary figurative artist based in upstate New York. Since the mid-seventies he’s worked from his garage studio creating elegiac sculptures and installations that are embodiments of death and loss infused with grotesque narrative and pathos. Gonzalez works primarily in a series with steel armatures and macabre collections of time worn objects, and detritus from his surroundings. The work is then further eroded with metal filings, burned wax, glue, wire, and black soot creating a dramatic tonal range that both obscures and reveals anthropomorphic heads, torsos and figures that appear as charred fetishistic mementos possessing a visceral quality imbued with a sense of primal energy and distress that permeates his work. In 2017, he was named the third place winner of Delusional: Jonathan LeVine’s Search for the Next Great Artist.

Tristan Eaton was born in 1978 in Los Angeles, California. At the age of eighteen he designed his first toy for Fisher Price and became an icon in the designer toys world. His works have been exhibited at the Cooper Hewitt Smithsonian Design Museum in New York City and are part of the permanent collection of the Museum of Modern Art. 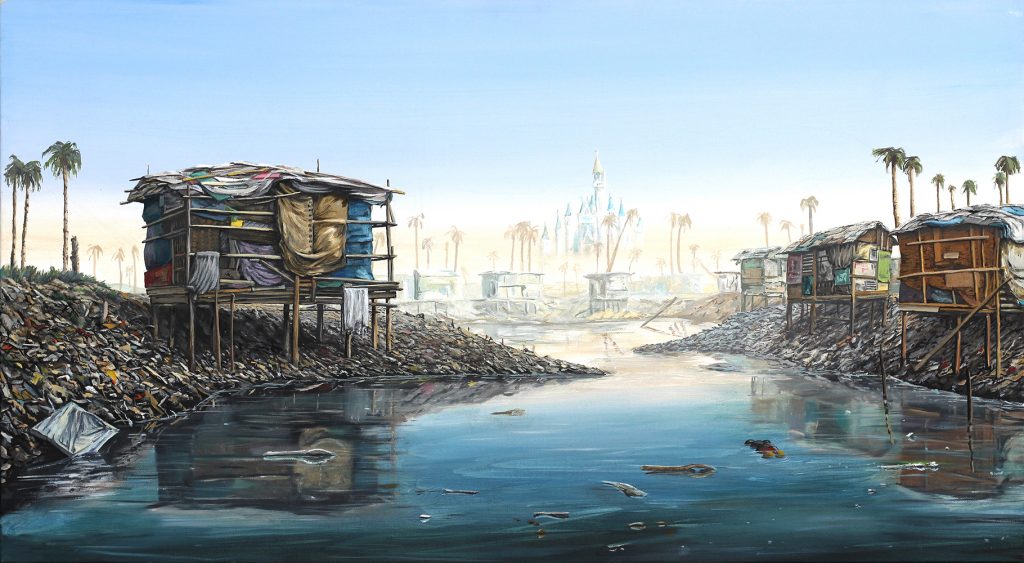 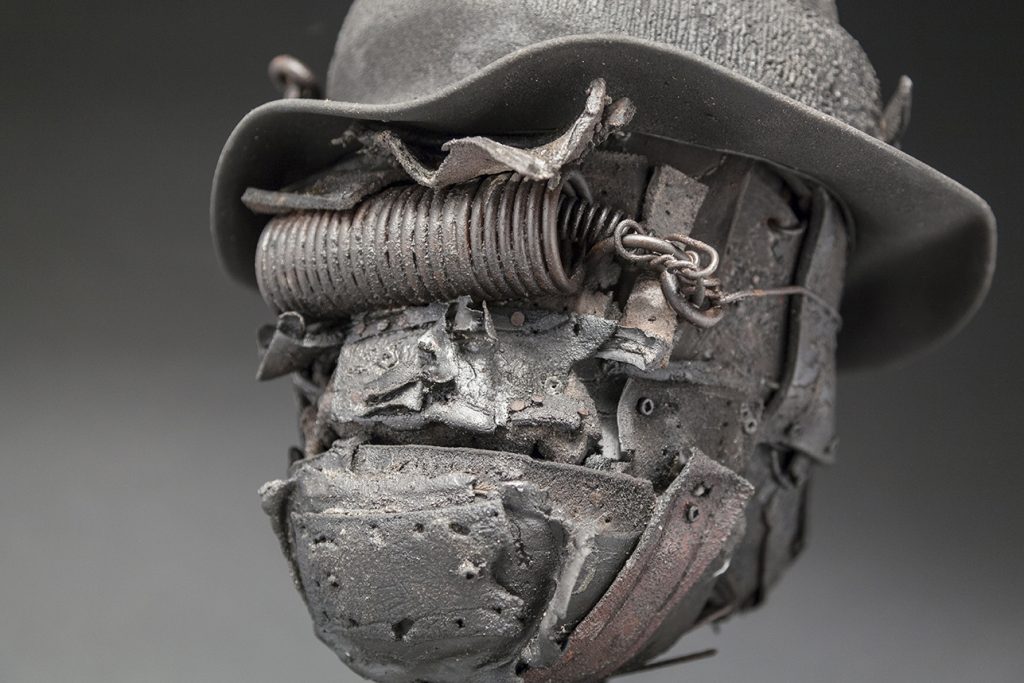 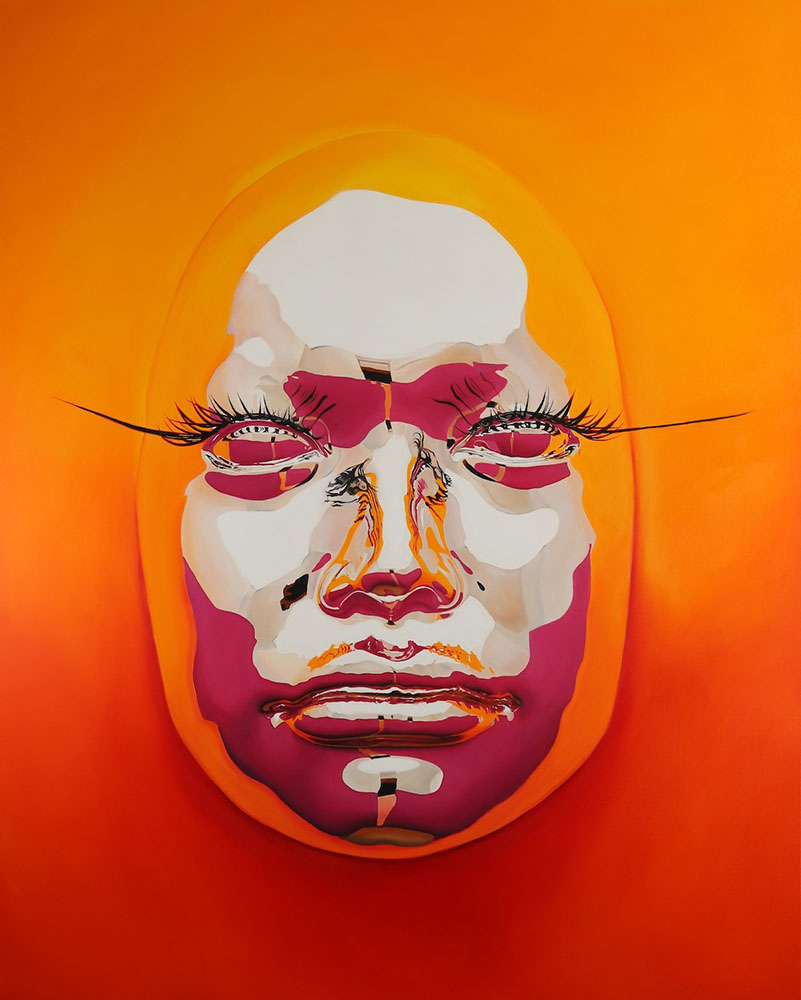