Jonathan LeVine Projects is pleased to present The Fourth Dimension: Time, a solo exhibition of new work by Dutch artist Handiedan in what will be her debut solo show at the gallery.

Handiedan pushes the boundaries of mixed-media work by creating collage based reliefs of classic female pin-ups using both digitally created and found components. Deeply influenced by scientific and spiritual interests – from Quantum Physics, Cosmology and Numerology to Sacred Geometries, Metaphysics and Eastern Philosophies – each work is a treasure trove of symbols that embrace the various forms of vital energy permeating the universe and mirror the eternal motion of life.

The Fourth Dimension: Time is Handiedan’s most personal show to date. Comprised of works that share her complex experience of passing and evolving through time, this new body of work gives visual form to the wonderings, visions and unconscious associations stemming from those journeys. The multi-layered depth of her impeccable collages give material shape to the fourth dimension and allow viewers to fully experience the interconnectedness of the universe.

Her process begins by gathering visual materials and combining them digitally with a fast-paced, intuitive drive. The creative process then shifts to a meditative, slow-pace as she assembles printed layers of her design with refined craftsmanship. Each detail is printed on multiple sheets of paper that are masterfully hand-cut and carefully pasted over each other to achieve a sculptural quality. Materials collected from Handiedan’s travels around the world, such as international currencies and stamps, sheet music, playing cards, science maps and share certificates, are then patiently weaved through the layers. The vintage aesthetic suggests the works has its own hidden story, traveling through real and symbolic places distant in time and space, resulting in a kaleidoscopic visual exploration.

The protagonists of Handiedan’s work are quintessential pin-ups, which are digitally composed of pre-existing pin-up images from the 1920-1940s and transformed into figures reminiscent of the Neo-Classical and Victorian ages, as well as the Parisian Belle Époque. With luscious liveliness, their forms bend in and out of the background to personify Handiedan’s investigation of femininity. Representing both the lover and the mother/the mistress and the goddess, they embody sexual freedom and are endowed with symbolic power that can be traced to the archetype of Mother Nature, i.e. the circle of life with its transitory stages of birth, decay and renewal.  Other reoccurring imagery in Handiedan’s work also refer cyclical aspects of nature, such as the skull, traditionally a visual reminder of death, and the butterfly, a living example of transformation and evolution.

Profoundly evident in Handiedan’s work is her interest in the Golden Ratio, also known as divine proportion, whose presence in all realms, from quantum levels to the eternal motion of planets and galaxies, is proof of universal law. Her subjects inhabit a visual world filled with Fibonacci spirals, fractal patterns, planetary charts and sacred geometric forms, all scientifically or symbolically representing the universal harmony. The varying visual motifs harmonically coexist in a single yet richly complex experience, which personifies the gradual accumulation of cultural and personal values, memories and stories, while also materially showing the work process itself.

In conjunction with the exhibition the gallery will release a limited edition giclée by Handiedan. Available for purchase at the gallery on October 14th from 3 – 8 pm and our online shop the same day at 6 pm. 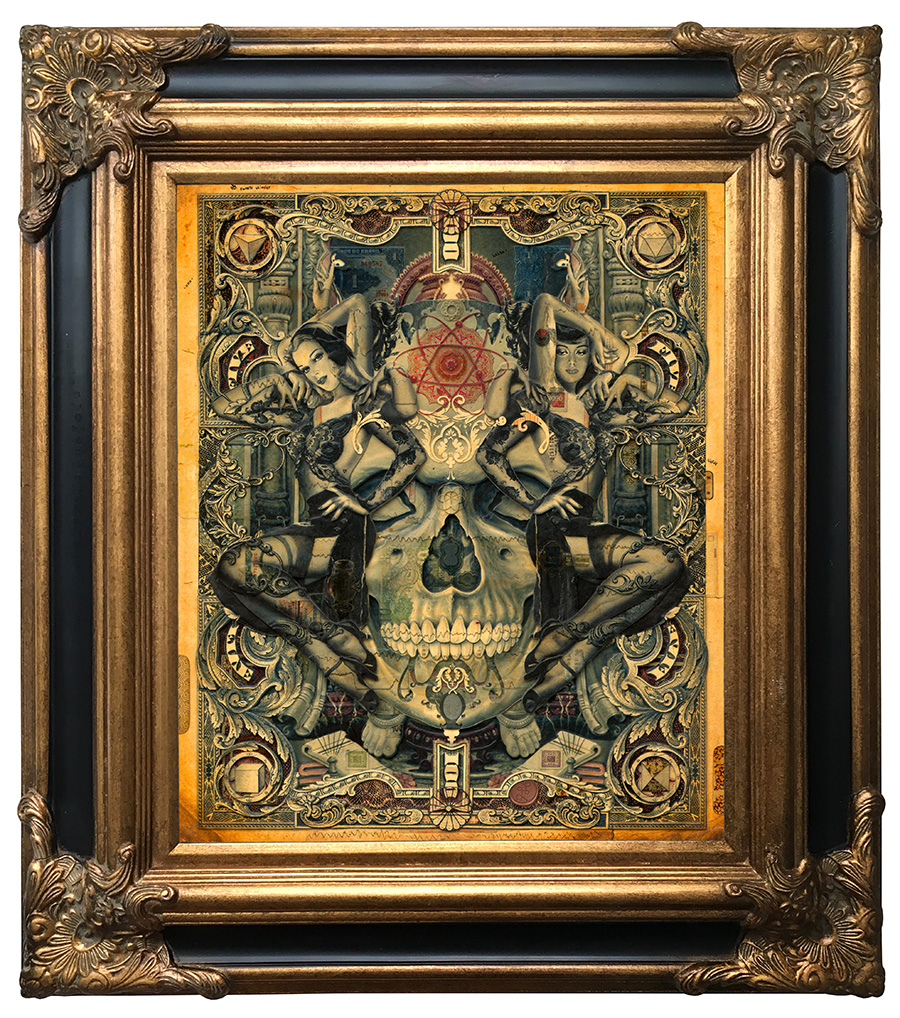 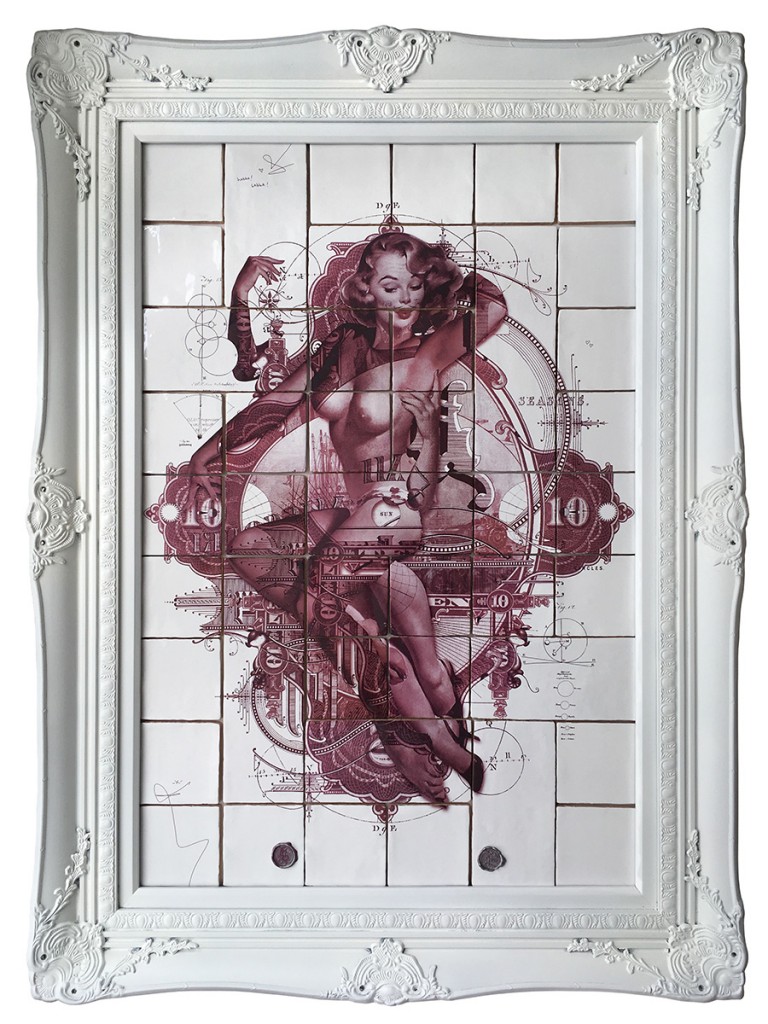 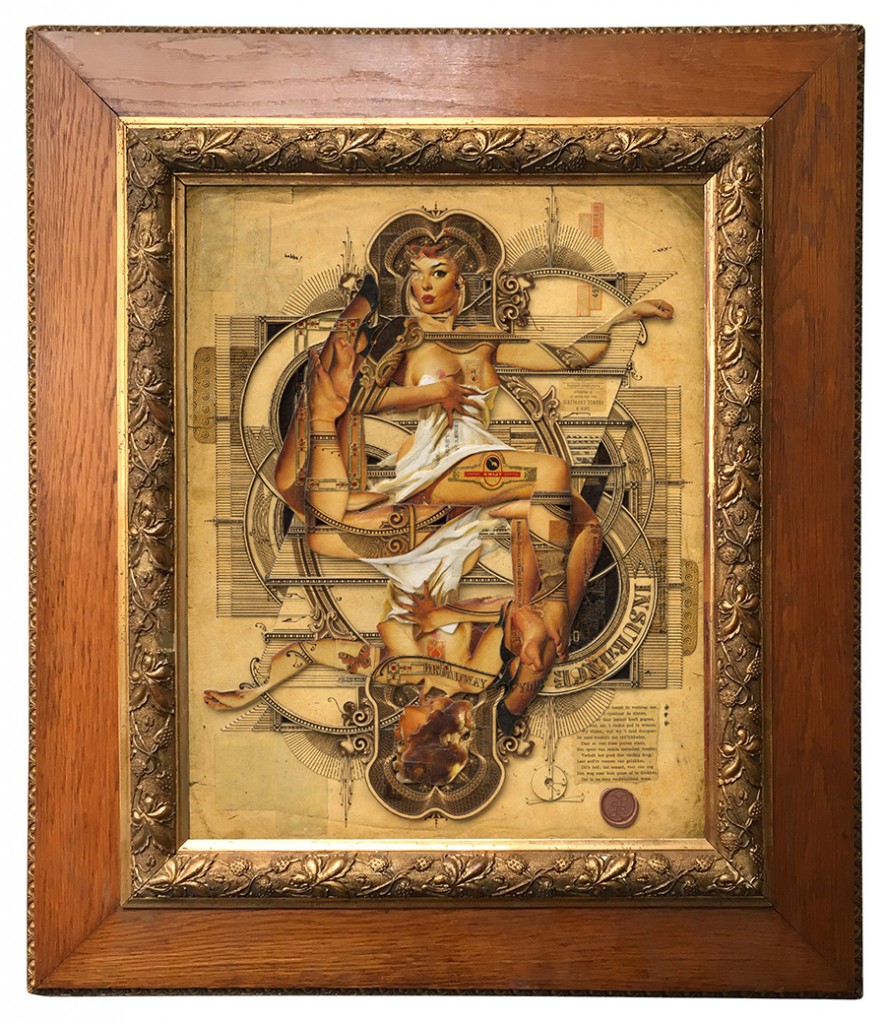