Cluster: A Group Show of Groupings

This exhibition features work by established artists who have previously shown at the gallery alongside emerging talent making their JLG debut. Each has been allocated space to display clusters of work, a concept that can be approached in many unique ways and grants each artist the opportunity to show the full range of their aesthetic. While some have chosen to display groupings of work that are similar or create one large piece surrounded by smaller works, others interpreted the idea of “cluster” and used it as source of inspiration. Similar to an art fair, in which pieces of varying mediums and styles are shown beside each other, Cluster includes sculptures, drawings and paintings by fifteen artists who might not typically be exhibited together.

Amandine Urruty was born in 1982 and is currently based in Paris and Toulouse, France. In 2015, she received her Master of Philosophy of Art and began working as an illustrator. Her drawings have been exhibited in galleries throughout Europe, the United States, Mexico and Asia. Two monographs of her work have been published: Robinet d’Amour (2011) and Dommage Fromage (2014).

Anton Vill is an Estonian artist who creates highly detailed drawings using ink, pencil and ballpoint pen. In his intricate, grotesque works we discover the anatomy of the mind, full of haunting experiences and curious emotions. Characters are sectioned, decomposed or distorted, always seeming helpless in their bizarre condition with a hypnotic and empty gaze.

Ben Tolman is currently based in Washington D.C. In 2005, he received his BFA from the Corcoran College of Art and Design and his MFA from American University in 2012. Tolman has exhibited work nationally and internationally and was a finalist in the Outwin Boochever Portrait Competition at the Smithsonian National Portrait Gallery.

Charlie Immer was born in 1983 and is currently based in Maryland. He holds a BFA in Illustration from the Rhode Island School of Design and draws inspiration from horror films, cartoons, nature, candy and video games. Immer’s work has been exhibited throughout the United States and has been featured in Juxtapoz and Hi-Fructose Magazine.

Drew Leshko is currently based in Philadelphia, Pennsylvania. By carving, cutting and layering varieties of paper and wood, he painstakingly recreates building facades from his neighborhood at a 1:12 scale. Working from observation and photographs, his sculptures examine gentrification and how historical relevance is determined. Leshko’s work has been exhibited in London, Berlin, Dublin, Chicago, New York City, Delaware, Detroit, Indiana, Philadelphia, New Orleans, Houston, Los Angeles, San Francisco and Miami.

Dylan Egon was born in 1966 in New York City and is currently based in Jersey City, NJ. He studied Anthropology and Archeology at Spring Hill College in Mobile, Alabama and later studied Film at City Tech University in New York. Egon works in a variety of mediums (collage, assemblage, sculpture) and often uses objects from his vast personal collection as focal points in his work. In a review for The New York Times, Benjamin Genocchio referred to Egon’s work as “sites of cultural compression, fetishization and wonder.”

Gary Mellon came to be in a small city on the shores of Michigan, a once thriving industrial center that supplied much of the lumber that built Chicago. By the 1980’s it was a skeletal remnant. Peeling paint, drafty rooms and cold sterile light, reminiscent of the Ice Palace in Dr. Zhivago. His work evokes space (both outer and inner), a psychedelic otherness, a primal reaction to the beauty and terror of life. Pink Floyd at Pompeii spliced with an ancient fertility ritual. “It’s not just the journey inward that’s important but also that I unearth and retrieve the contents with my own hands. The point of making art to me is that I get to experience the act of birthing it. It’s a consciousness altering activity”

Gary Taxali was born in Chandigarh, India and raised in Toronto, Canada, where he is currently based. In 1991, he graduated from Ontario College of Art and Design University (OCAD). Taxali is an award winning illustrator and his work has been exhibited in galleries around the world, as well as at the Whitney Museum of American Art in New York and the Contemporary Art Museum in Rome. In 2011, two books of his work were released: Mono Taxali, published by 279 Editions, and I Love You, OK?, published by teNeues. In 2015, Gary Taxali: The Art of Whimsy, a short film about the artist premiered at the Canadian Art Film Festival.

Luke O’Sullivan was born in 1984 in Boston, Massachusetts and is currently based in Philadelphia, Pennsylvania. He received his BFA from The Art Institute of Boston in 2006 and his MFA in Printmaking from the Rhode Island School of Design in 2009. Through the application of screen-printed drawings on wood, metal, and other flat surfaces, O’Sullivan creates architecturally based sculptures. Often inspired by dystopian and science fiction films, he combines recognizable architectural forms and impossible buildings to make diorama-esque works. He has exhibited in Massachusetts, Maine, Rhode Island, New York and Philadelphia.

Marco Mazzoni was born in 1982 in Tortona, Italy and is currently based in Milan. He received a bachelor’s degree in painting from Brera Art Academy (Milan). Mazzoni’s colored pencil work often depicts flora, fauna and female herbalists of 16th-18th century Sardinia. He has had solo exhibitions throughout Europe and the United States.

Nicomi Nix Turner is currently based in Oakland, California. She studied at the California College of the Arts but left to pursue work as an illustrator for the popular character brand Emily the Strange. Creating detailed graphite illustrations that evoke a surreal understanding of the perfection in nature, her works delve into the occult and their connection to alchemy, mythology, decay and birth.

Ron English was born in 1959 in Chicago, Illinois and is currently based in Beacon, New York. He coined the term “POPaganda” to describe his trademark fusion of high and low imagery, mixing superheroes and comic strips with art history iconography in his prolific paintings, billboards, and sculptures. English has imagined a vast roster of characters and is best known for combining expert draftsmanship with a cynical, humorous critique of American culture.

Sam Gibbons was born in 1980 in Youngstown, Ohio and is currently based in Baltimore, Maryland. His colorful, painted cartoons explore dark themes, subverting the notions of innocence and moral value in children’s entertainment. Painting on wood or MDF panels with custom-cut outer edges, Gibbons frequently paints symmetrical imagery, of which he has said, “The mirroring of the sides puts all that chaos into a structure and the painting almost becomes about shape and pattern rather than content.”

Smithe One is a Mexican illustrator and graffiti writer currently based in Mexico City. Influenced by Japanese animé, graphic styles from the 1950s and science fiction films, fragmenting figures is a common aesthetic in his work, which he utilizes as a vehicle to show the interior elements that power his surreal, machine-like characters. Smithe One is not only renowned in the international street art scene but is also known for his involvement in design, sculpture and is member of the band Punto Stendal. He has exhibited his work in the United States, Germany, France, Belgium, United Kingdom, Spain and Mexico.

Tran Nguyen was born in Vietnam and raised in Los Angeles, California, where she is currently based. She is fascinated with creating visuals that can be used as a psycho-therapeutic support vehicle to exploring the mind’s landscape. Her paintings are created with a soft, delicate quality using colored pencil and acrylic on paper. Nguyen has worked for clients such as Playboy, Tor and McDonald’s. Her work has been exhibited at galleries in California, New York, Spain and Italy.

Troy Coulterman was born in Arnprior, Ontario and graduated from the University of Regina with a master’s degree in sculpture. He crafts three-dimensional human figures in seductive colors with exaggerated features that are directly influenced from graphic novels. Absurd, abstract forms engulf, drip and extrude from the figures he creates. These forms become part of the figures and are visual metaphors for the absurd anomalies and emotional states the characters are experiencing. His work has been included in numerous group exhibitions and he has had solo exhibitions in Toronto, Portland and San Diego. 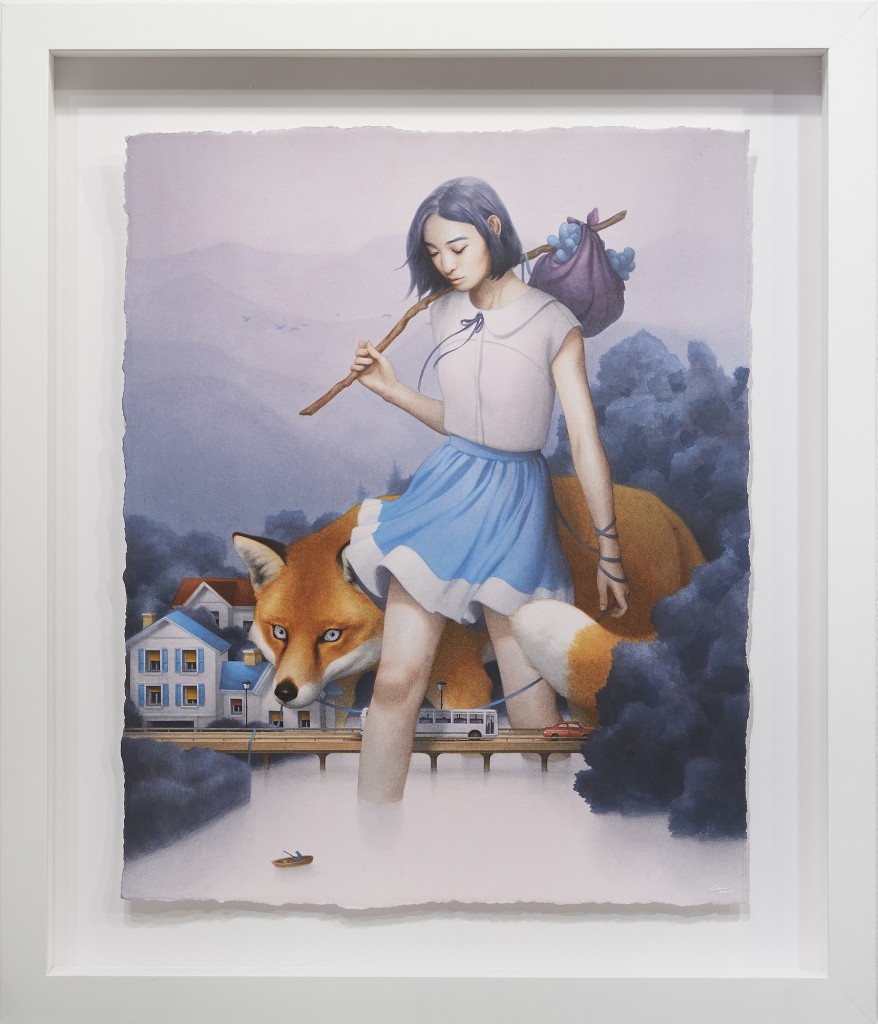 Somewhere Between Now & Then 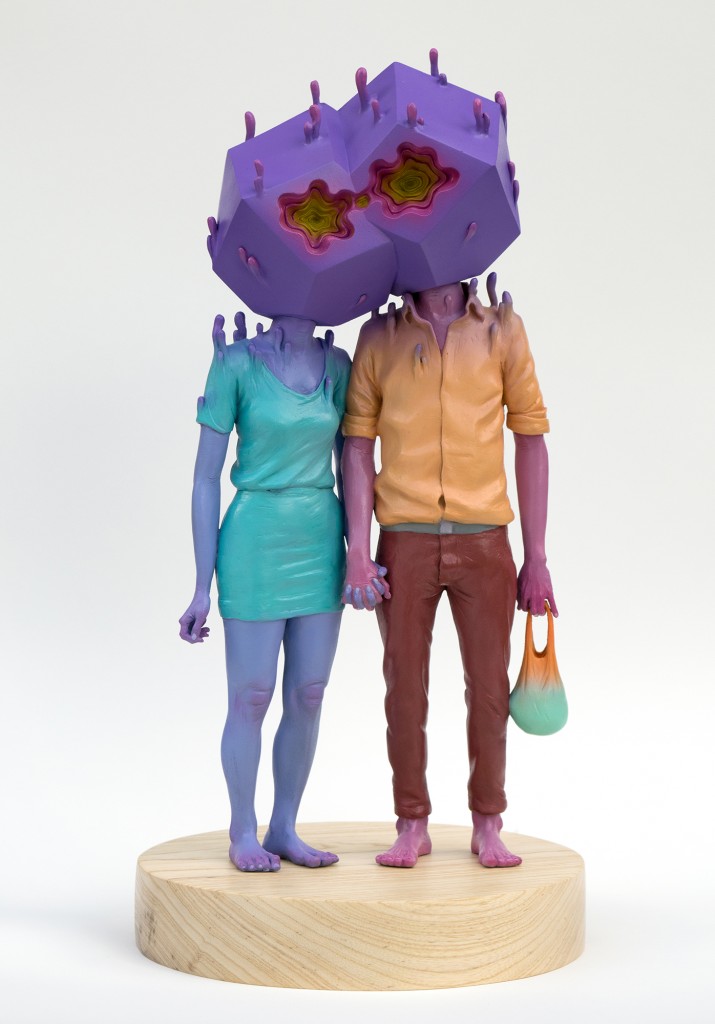 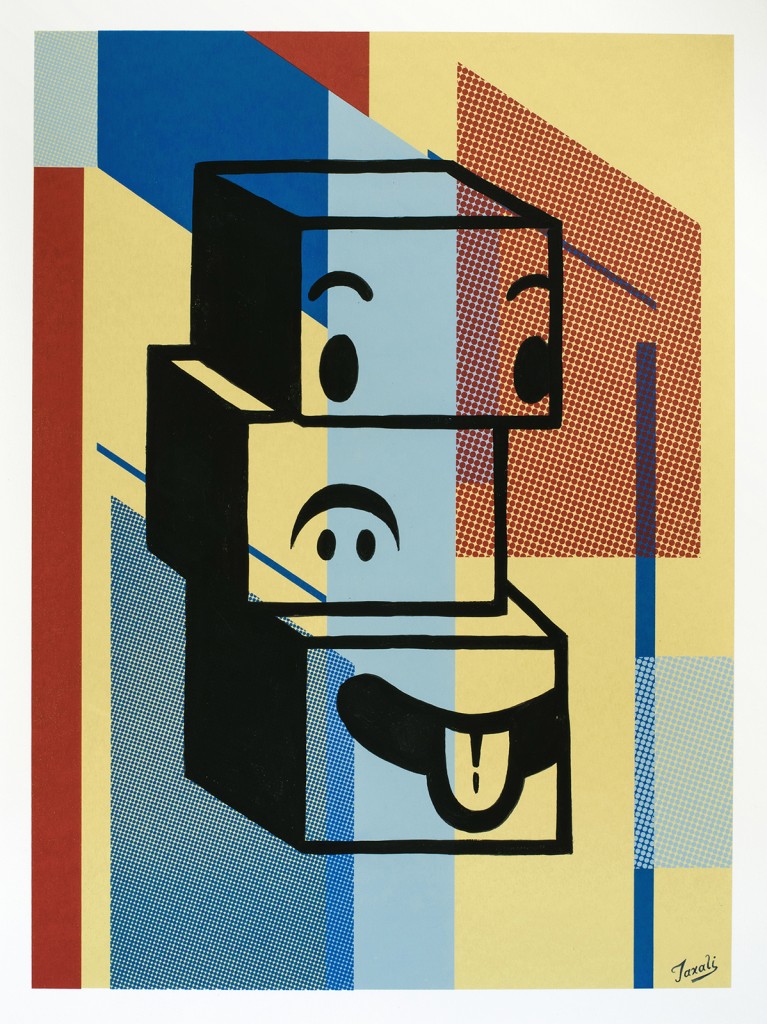