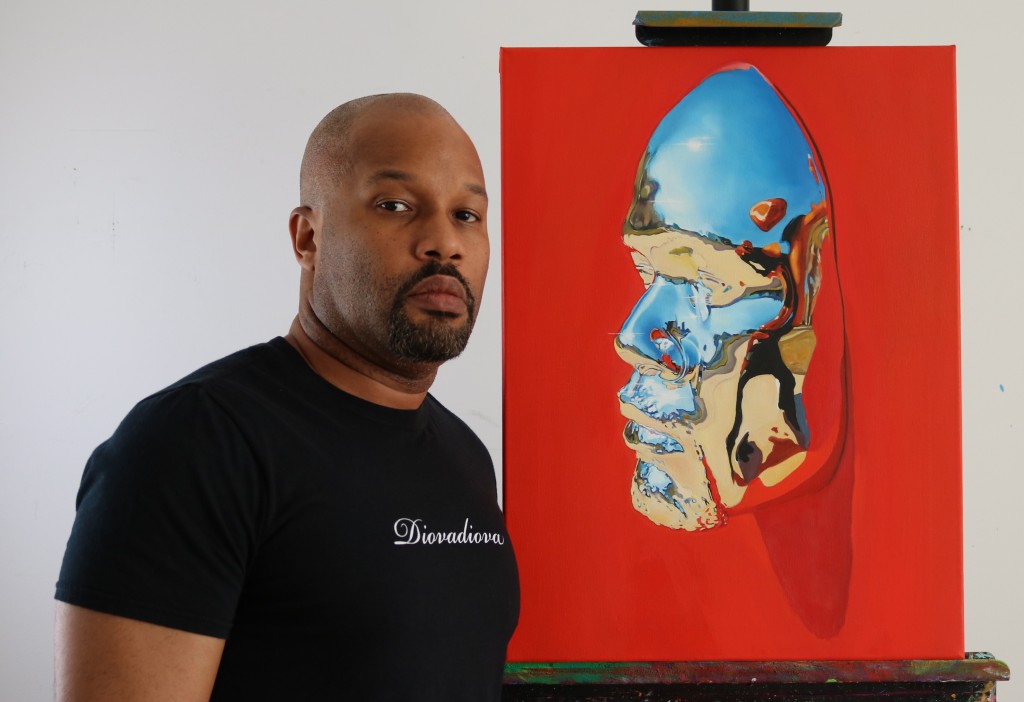 Kip Omolade’s Diovadiova Chrome series is a perpetual work in progress, and each new exhibition reveals an expansion of his particular vision.

The New York City artist works in sculpture and mixed media, creating intersectional paintings through a multidisciplinary process. The abstract portraits that comprise his ongoing series analyze immortality, identity and body image as they relate to psychology and spirituality.

This weekend, Jonathan LeVine Projects is hosting Omolade’s latest incarnation of Diovadiova Chrome at their new location in Mana Contemporary. The opening reception will take place from 6 to 8 p.m. on Saturday, Nov. 18. The exhibition will be on display at the Jersey City museum through Dec. 16. 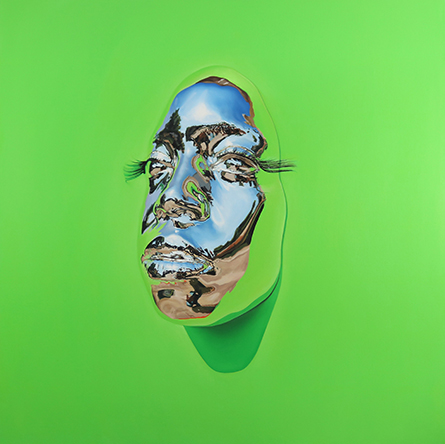 Omolade develops his paintings through multiple stages. He first creates face molds from human models using cast plaster, resin and chrome paint. These masks are then photographed and rendered with oil paint on canvas.

The molding process was influenced by ancient African traditions such as ivory masks and Ife bronze heads. The artist has adapted this form of representation to the 21st century, through the use of metallic paint and digital photography. 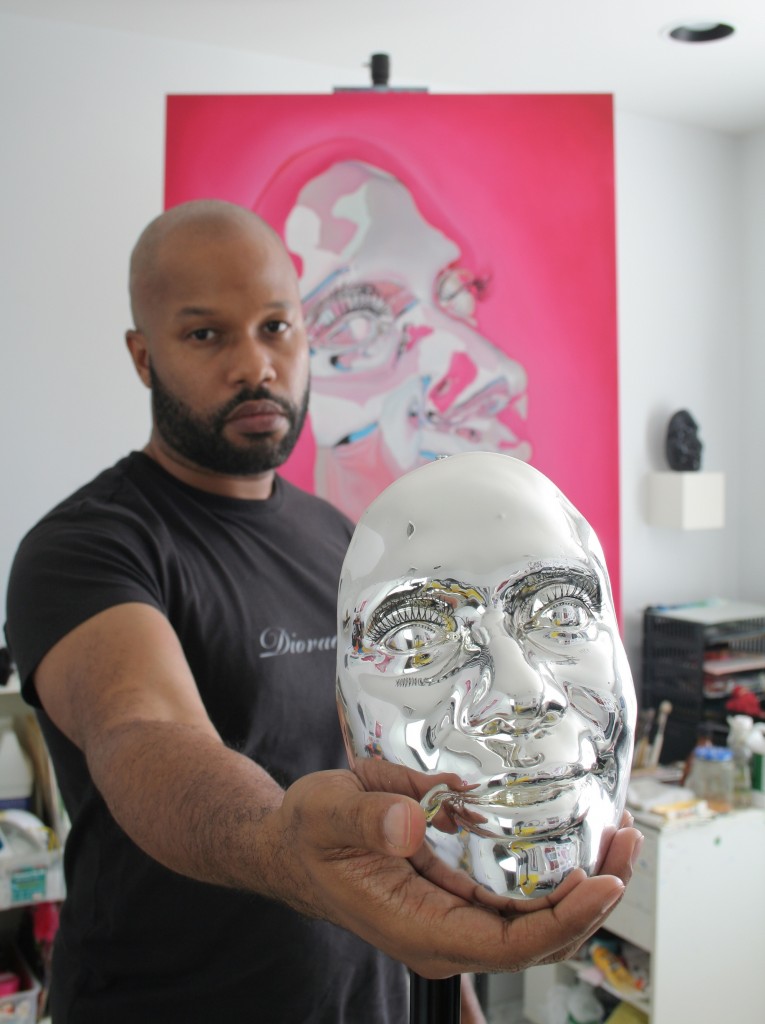 In studying human subjects, Omolade emphasizes the particular features of each visage.

“There is something powerful that happens when an artist focuses his or her entire attention to capturing a person’s likeness,” he said. “With ‘Diovadiova Chrome,’ the attention is even more amplified because I’m actually touching the model’s face during the molding process. I get to know more about the person when I feel the contours and details of her face.”

The juxtaposition of chrome and neon creates a glamorous ambience reminiscent of high-end urban nightclubs and fashion magazines. Omolade cites contemporary pop culture as the original catalyst for the series.

“I was studying the relationship between art and celebrity, but the process allowed me to explore various ways of representing a person’s face,” he said. “One of my final versions of the ‘Diovadiova’ model was a metallic rendition that referenced sci-fi characters. First I used a combination of sculpture, Photoshop and painting to achieve the shiny surface. But in terms of self-expression, I wanted something that was more truthful. With a lot of trial and error, I developed my chrome technique.” 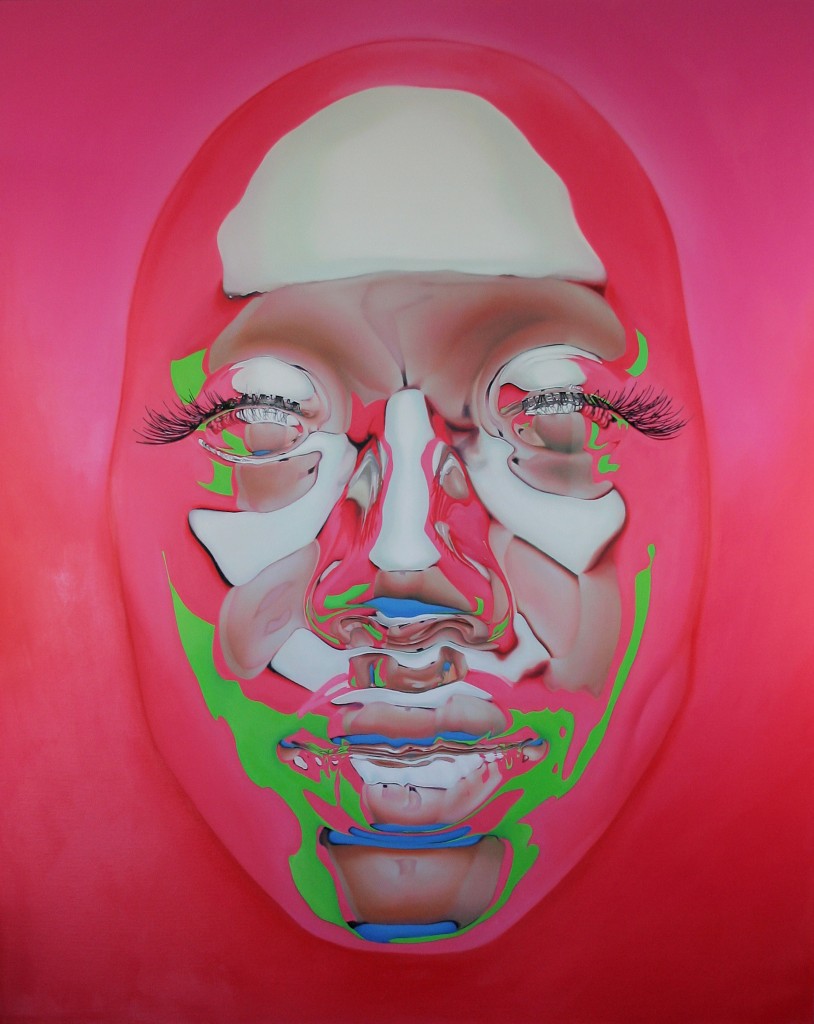 In synthesizing ancient rituals with modern tones, Omolade has established an innovative form of expression. The artist developed a 10-year plan for different “Diovadiova Chrome” exhibitions, with each show representing a specific chapter in a larger story.

In December, Jonathan LeVine Projects is also featuring Omolade’s work at the SCOPE Art Show, part of Art Basel in Miami. For more information on the artist, follow @kipomolade on Instagram or visit www.kipomolade.com.

Under the Influence: New York Hardcore In the first episode of our series Under…