It’s not often you get to see an art exhibit that’s an equally measured melding of pop culture, wit-heavy satire, surrealism and impressive skill. But that’s what Mike Leavitt, also known as ReMike, is all about. The Seattle-based artist started out by making evolved action figures more than a decade ago. Now his small-scale creations are known for treading the line between high art and playful fun. You also might have seen his on-point rendition of Bernie Sanders, commissioned by friends of his at a Brooklyn toy company.

Now his latest collection, King Cuts, is on display at Jonathan LeVine Gallery in New York City through June 11 (his third solo exhibit for the gallery). It features 16 famed film directors, cheekily referred to as the “best directors ever carved in wood.” Film buffs could make a drinking game out of spotting the myriad of film references effortlessly worked into each character. (Look for a whopping eight various film references on Wes Anderson.) I had the pleasure of meeting Mike at the gallery in Chelsea to talk about the project. It was a bonus to be there when the gallery manager interrupted to tell him Spike Lee had just called because he was interested in buying the totem in his likeness and was en route. It had already sold, but needless to say, Mike had no reservations about creating another one for the director.

So, the subtitle for this exhibit called the group the “best directors ever.” Is that kind of tongue-in-cheek?

Definitely, along with the “carved in wood” bit. I’m just trying to start a dialogue. To say anybody is the best at anything—nobody is ever going to agree, especially in movies and music. Music even more so.

When it comes to movies and the idea of auteurs, once a director has amassed this big body of work, people kind of accept it. That doesn’t necessarily happen with music.

People take music really personally and get so attached to it. People take ownership over it.

Why reimagine directors as opposed to, say, rock stars?

I’m looking for visual material to start with, and I knew if I started going down this path, there’d be a lot of iconography to work with. Music’s trickier. Rock stars create their own cult of personality. That was another reason I like this idea. I hadn’t really seen these guys represented in that form.

Usually we associate directors with staying behind the scenes.

And I think that’s kind of become some of my shtick for a while. Since I’m good at sculpting the likeness of a face, it gets interesting when it’s a face maybe you wouldn’t recognize off the bat, but you know who it is. You know that person’s work. It’s the face behind the mask, the person behind the camera, the wizard behind the curtain. 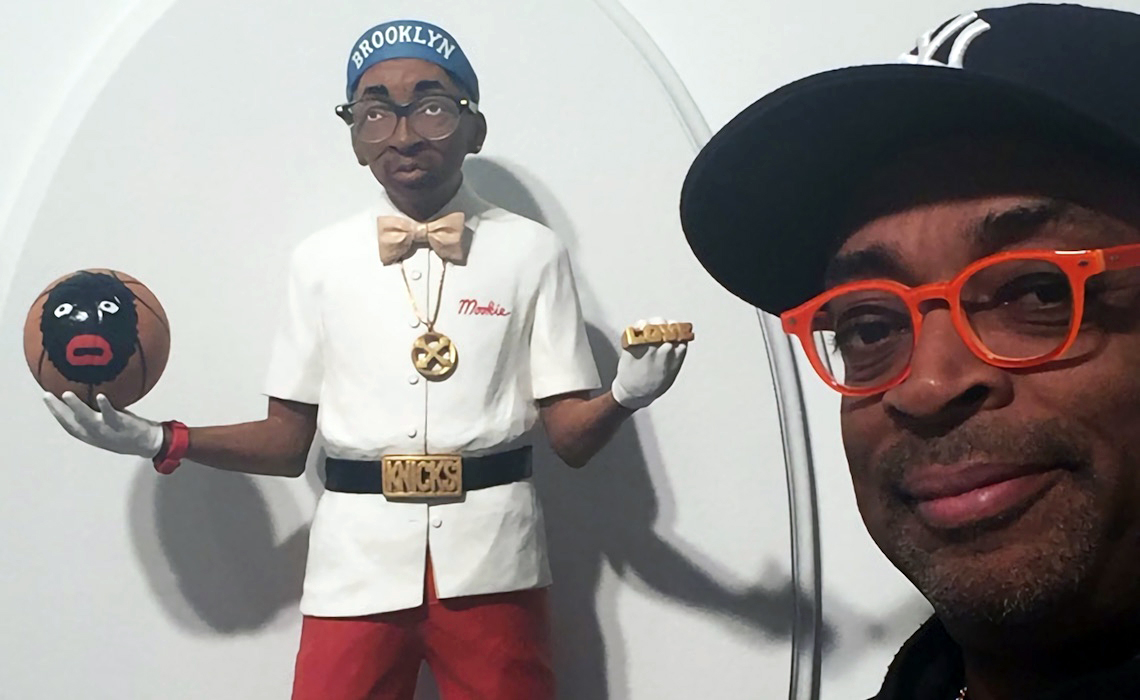 Spike Lee visiting the gallery to check out his sculpture

And then there’s the satirical element that you impart.

Yeah, I’m kind of a prankster. A lot of these guys I really love, too, so I’m making fun of them and paying homage at the same time.

I’d think you wouldn’t be spending the time if you didn’t have some degree of respect for the subject.

It’s either respect for their talent or work or respecting the fact that they’re a phenomenon, by their control or not. It’s like, “There’s something going on. This deserves to be made fun of or have a moment.”

Do you have a favorite director?

I definitely like [Stanley] Kubrick’s movies. I love Star Wars—I grew up with it. I wouldn’t say those are the best movies ever made, but I have a nostalgic attachment. Wes Anderson, I really like.

What was the process like before you started carving? Did you watch a lot of movies?

Yes, I did a lot of research. Well, “research”—I watched movies.

There were a lot of movies I hadn’t seen. Like I had never watched The Godfather, which is weird. It’s such an iconic movie and something I had to do for this show, so that was a great excuse to watch it. A lot of my work is about trying to do a parody of pop culture, but it’s also about the fact that I grew up inundated with it. I was born in ’77, so I came right into the eighties and it was just corporate shit piled on top of me. That’s all I knew. It wasn’t until I was in my twenties and kind of woke up and went, “What the fuck? That’s fucked up!”

There’s a form of brainwashing going on there, for sure. Like, “Wait a second!”

I was taken with the whole Barbie element.

It’s totally related. For us, it’s G.I. Joes and action figures, which I’ve been doing for 10 years. 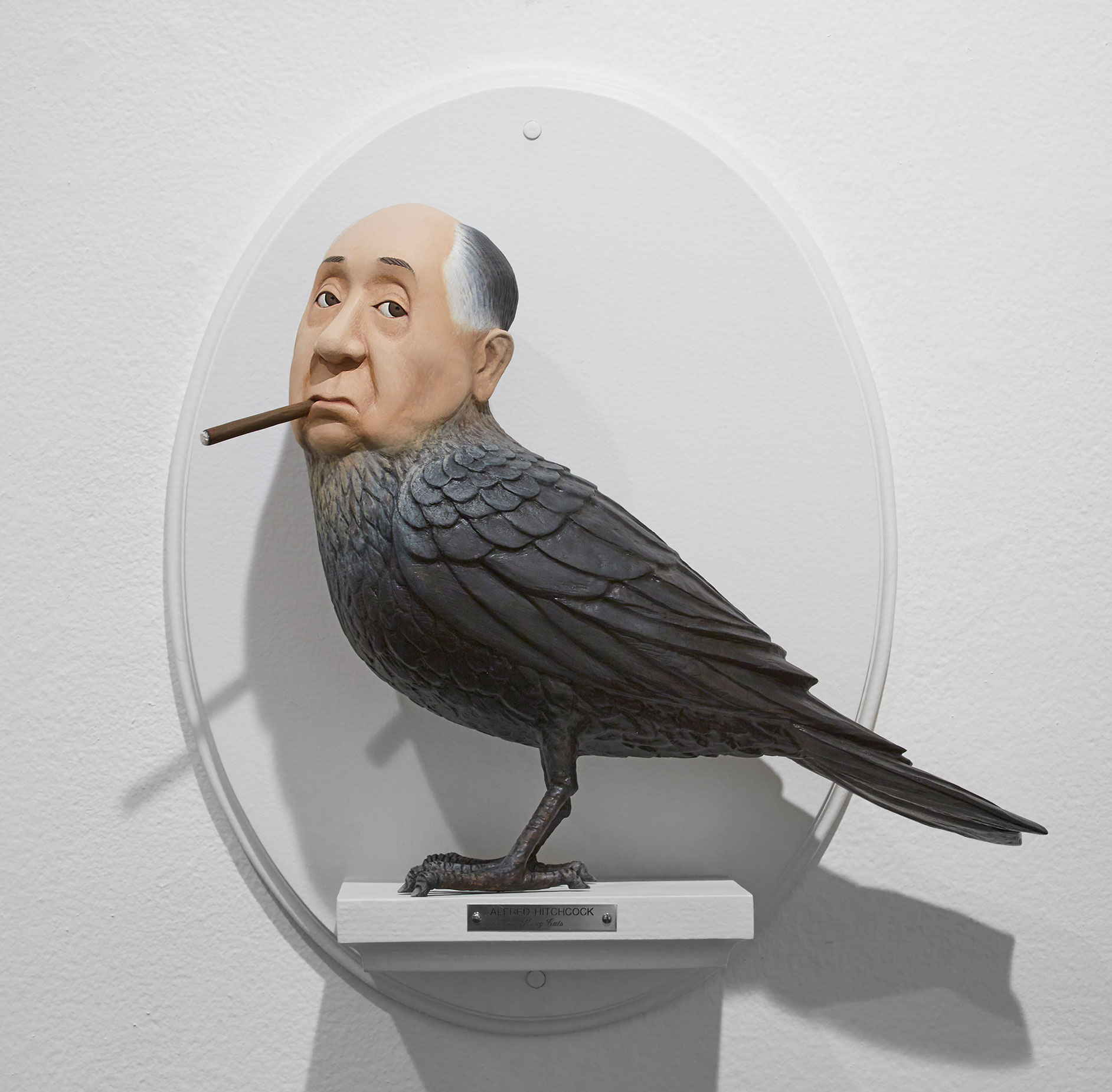 Did you start by making action figures?

I went to art school at Pratt [Institute] in Brooklyn for a year. I got a 4.0, made the Dean’s List and I was bored, so I left. I took a year off, went to two other schools, and didn’t know what I wanted to do. In my last quarter, I started making trading cards. Half the set was my influencers and the other half was my own work. I started them because I was having the opposite of writer’s block. I had too many ideas and needed a way of organizing them. I started selling those for five, 10 bucks a pop, right off the bat. After maybe two years, it seemed like a natural progression to go from baseball cards to action figures. Jackson Pollock was my first action figure, and it hit immediately.

What’s the weirdest request you’ve gotten for a commission?

It was a private commission a number of years ago for a guy in LA. He was a total stoner and rapper wannabe. He wanted me to sculpt his dick on an action figure of himself, but with pants. He wanted to be able to pull the pants up if people came over and down to show his buddies his dick. Then it got really weird because, you know, flaccid or hard?

I would guess hard?

I think I actually made it swivel so it could go flaccid. He was giving the finger, too. I actually almost did Woody Allen as just a big cock and balls, but then I decided against it. 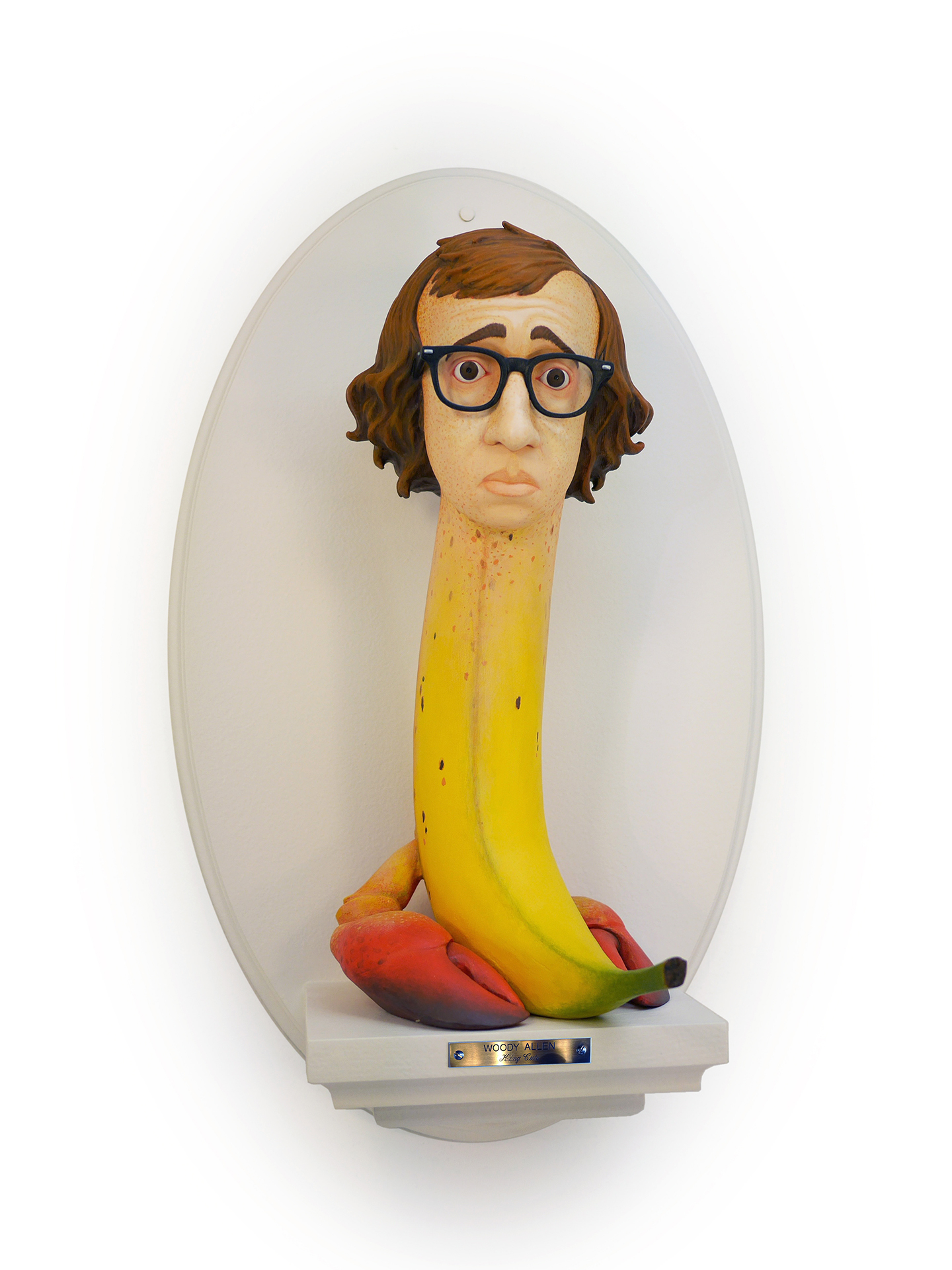 I think the point gets across.

I’ve also done a lot of toppers for wedding cakes, but actually a lot of people are doing that now, either sculpting them from scratch or 3D printing them.

Is 3D printing screwing with your niche?

I just went ahead and learned the software so it wouldn’t pass me by. I don’t know what I’m doing with it yet. I’m just trying to get my head around purely digital sculpture, like CGI graphics for movies, which is the best 3D modeling, and then video games. What interests me about video games is those dudes are sitting around, maybe all day, every day, and that is their reality—their digital avatar. That’s kind of fucked up and demented but also fascinating to me.

It’s a virtual existence, but that blurring of the line between what’s virtual and what’s reality is interesting, especially as it becomes more prevalent.

It’s headed in that direction, and I still see a lot of room for art and sculpture, too. Right now, they’re trying to get CGI to mimic reality. Maybe they get there at some point. For me, it’s like, “Go for it.” Art, photography and film all tried to do the same thing, but after awhile, you can play with it. I see it as room for a guy like me to get in there and do something with it.

Did you feel like you had to put Kathryn Bigelow in the collection just to have a woman director?

Absolutely. That was actually the biggest argument I had with my wife, my sister, any female friend, and a few male friends, too. I would call myself out well in advance. Kathryn didn’t show up until the end. She was number 14. I’m glad you’re asking me about this because it still weighs on me. 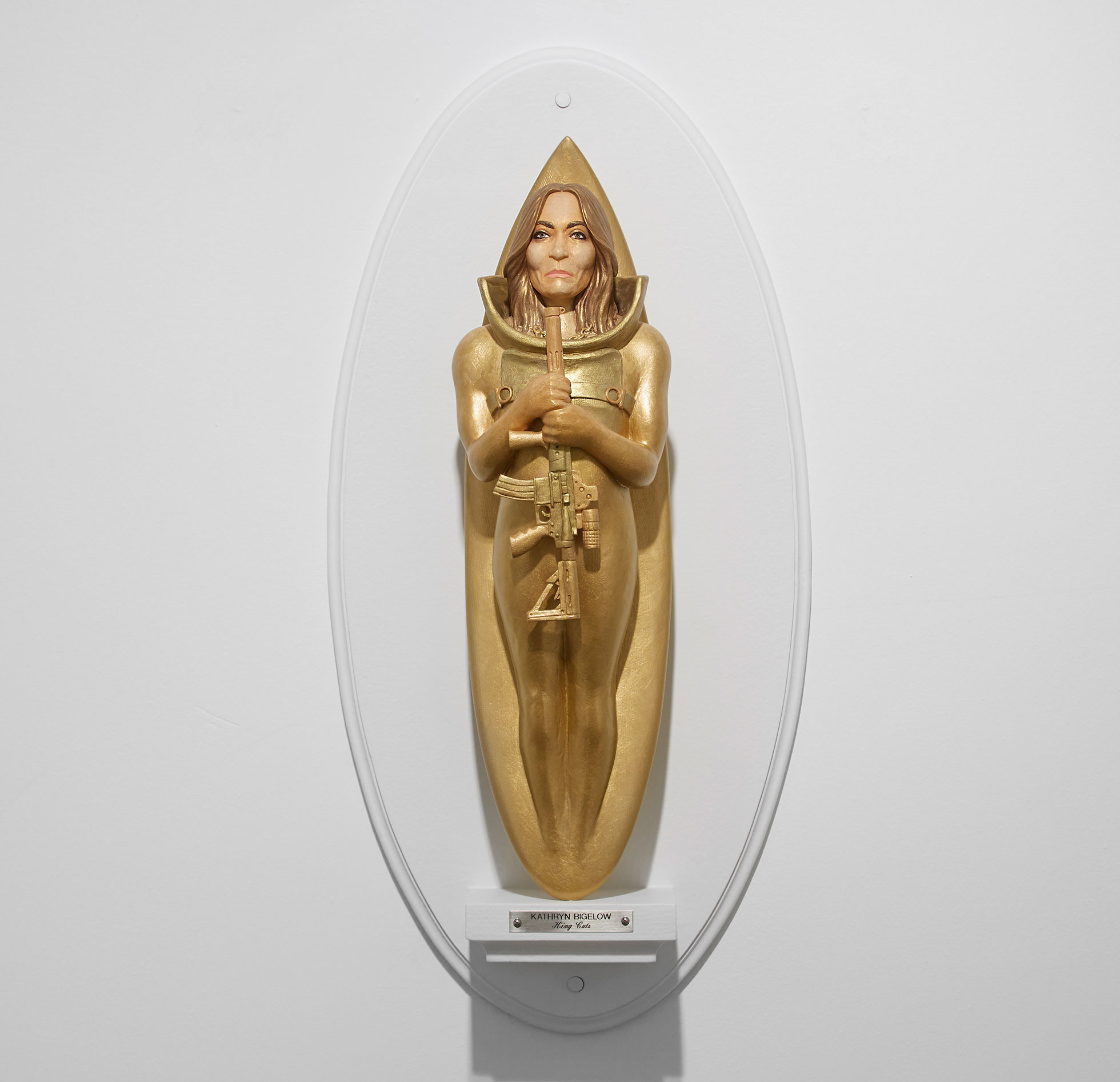 Well, you didn’t create the climate in the film industry…

I think it’s because it’s a fucked-up reality. There are plenty of talented female directors out there who are just as good as men, and they’re not getting the exposure. I felt like I had to address it somehow because it kept coming up naturally. I would call myself out, just because I saw it coming, and say, “I’m not doing any women.” And that discussion went like this every time, “I need it to sell. I’ve done 400 different figures, and from my inventory, 90 percent are sold. And guess what? At least half the inventory I haven’t sold is women.” I’d ask people to name a female director, and a lot couldn’t even do it.

So then I’d find myself teaching people about Kathryn Bigelow and that she won an Oscar. She’s very self-aware. She says outright that she makes these machismo action movies because she knows they’re the ones people will watch. Then I came up with the image of her as an actual Oscar.

That’s essentially what you’re doing, too: making what you know will sell. Which women have you depicted?

Oprah, Angelina Jolie, Hillary Clinton… she sold… Sarah Palin—yeah, okay, I mean, people hate her. Why would anyone want to buy that? But she’s an important character, the bad guy.

People laughing and smiling. I love overhearing someone giggling at one of the pieces when I’m here.