Art Fair 14C: What’s there this weekend and what’s next for Jersey City’s biggest art gathering
By David Mosca 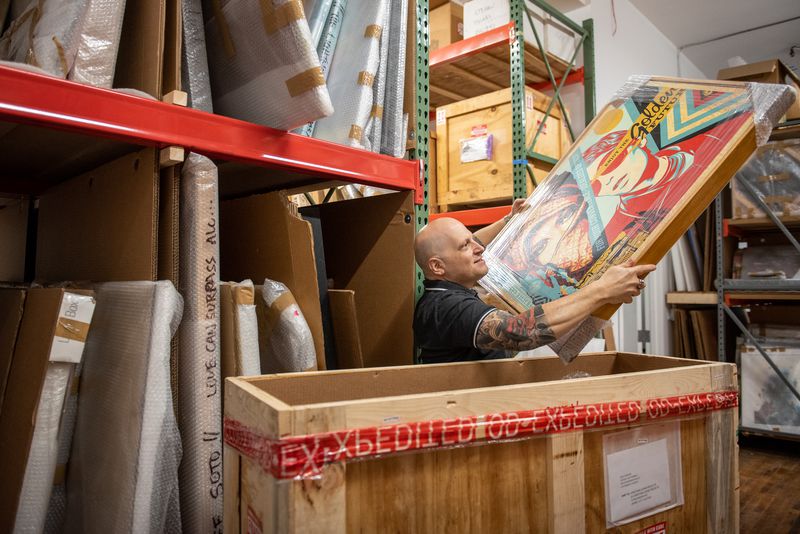 It’s the largest visual art event in New Jersey that happens under one roof, and it takes place in Jersey City. Art Fair 14C is returning for its fourth edition this weekend at the Armory in Jersey City from Friday, Nov. 11, to Sunday, Nov. 13.

Artists from New Jersey and around the world are preparing to take part in the annual event that allows artists and galleries to connect with the broader public and gain additional interest and engagement in the visual arts.

In October, it was stated that attendance at this year’s event is expected to surpass all of the previous records at Art Fair 14C.

“This whole thing was made so that we could help people in the visual arts make a living,” said Robinson Holloway, executive director of Art Fair 14C. “It helps people in the arts be seen and it also helps art lovers see new things. Whether it’s new art or challenging art.” 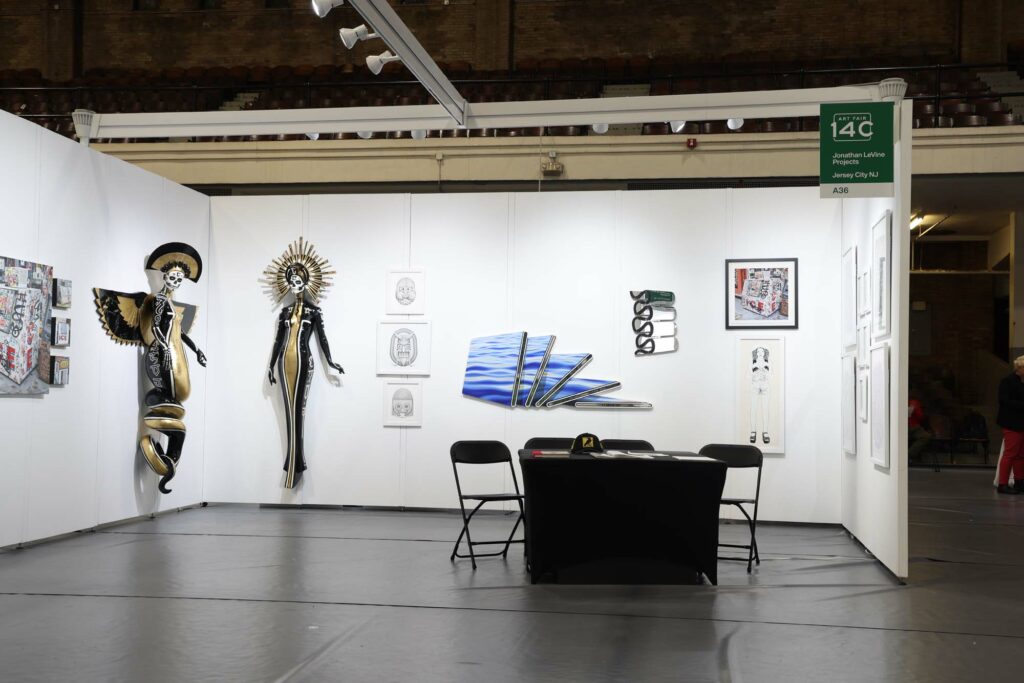 Following this year’s event, visitors will be sure to wonder what’s next. As of now, that can be answered. Next year, the Art Fair 14C will expand its model to satellite fairs in Monmouth County. Further expansion is expected in 2024.

“We’re seeing that the future for the state is very bright when it comes to arts and culture, especially with events like 14C and its community activations” said Jason Rand of HarrisonRand, one of the partners of Art Fair 14C.

While still an experiment, their first satellite fair, Art Fair 14C: Detour Bell Works, will include a space of over 20,000 square feet in April 2023 at the historic building by famed architect Eero Saarinen designed for Bell Labs in Holmdel. The satellite fair will be half the size of November’s event, with each fair having its own identity.

“We’re attempting to do a satellite fair in a different part of New Jersey every spring while we keep the big fair in Jersey City every November,” said Holloway. “Bell Labs is such a huge and beautiful space. With Monmouth County being a very arts rich area, it felt like a good place to start.”

The application for exhibitors will be opening the first week of November 2022 and for the first time, the Showcase exhibition will be open to artists beyond New Jersey to honor the innovation of Bell Labs. For 2024, 14C is hoping to hold its satellite fair in Bergen or Morris County. 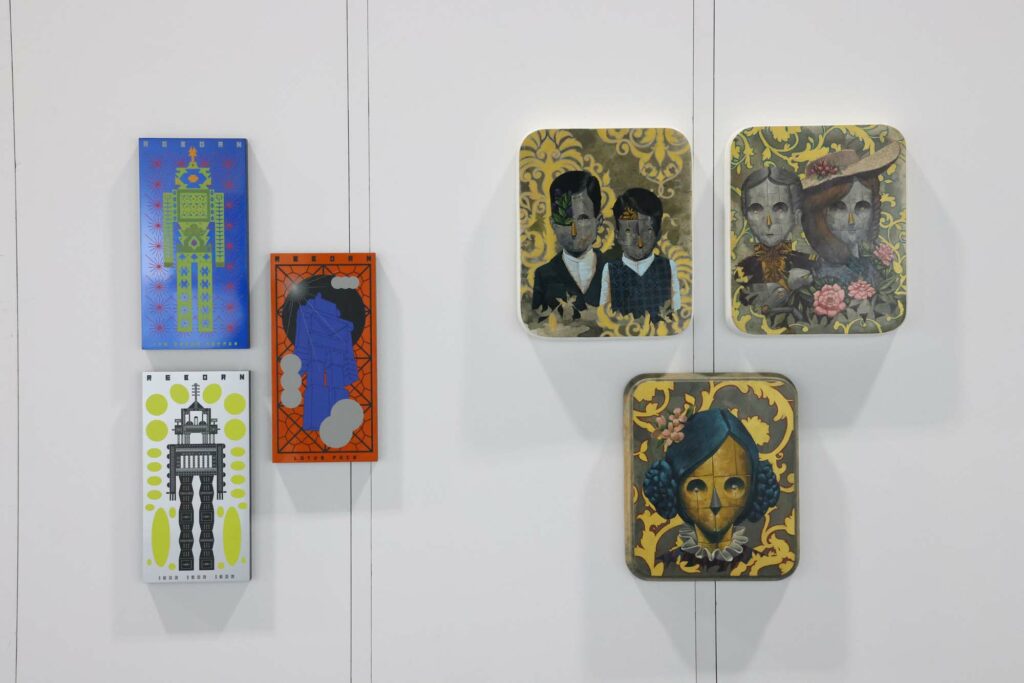 This weekend is also 14C’s first time showcasing the event at the Jersey City Armory. Last year’s event was held at Mana Contemporary. But bringing such a large-scale art event to a space that’s not exactly for entertainment was challenging.

“This is a team that is literally working 24/7 to get this produced,” said Rand. “It’s hugely ambitious in scope and there are so many details that people don’t see or hear about when there’s a vision to activate a space like this.

“Jersey City has all of these amazing large-scale buildings that are waiting to be activated,” he said. “New Jersey has all of these different communities and I think the one thing that Robinson and her team does well is that they understand the unique DNA of each community and they’re able to reach out and pull them in wherever the space is, and it’s activated in a way only an art experience can do, which is bringing in all different kinds of artists as well as visitors and art lovers.” 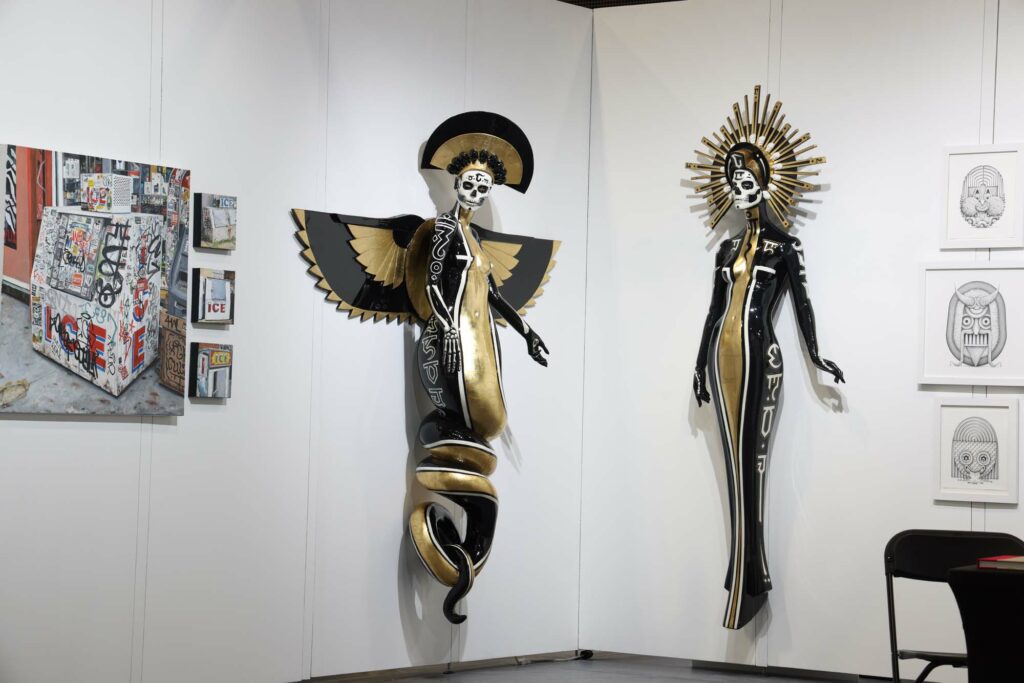 Featured artists for this year’s event include Geraldine Gaines, a visual artist from Jersey City who was the winner of Art Fair 14C’s People’s Choice Award in 2021 and has a free booth at Art Fair 14C’s 4th Edition fair.

Gaines is known for her African traditional mask carvings, which have been shown in several art shows in the New Jersey and New York City areas. She refers to these works as “Doors to the Past” in which she uses old and new wooden doors as her canvas in recreating the elaborate masks images on her doors.

“I started painting masks while going back to NJCU and while in a studio class where the professor told us to make up a concept and use something old,” said Gaines. “I know I wanted to do the masks, but I didn’t know what to put them on. The idea of a door popped into my head, and I figured I could use that, but I still wasn’t sure how I was going to do it. I didn’t know if I would burn it in or carve it in. After sleeping on it, I realized that I was going to carve it in, which I’ve never done before.”

The collection consists of several doors with mask-themed carvings overlying African inspired fabric wax prints. She completes each carving by adding dark contrasting colors, which makes the image appear as if it’s popping off the surface.

Gaines has been commissioned by others to do the same work, where she creates the work on their own door. She’s been doing this since 2007. The goal of her concept is to educate those who don’t know the history and culture, and creativity of African masks.

“It’s been a journey to find places to show your work or to connect with other artists,” says Gaines. “14C has added visibility to my work, especially for people that wouldn’t normally be able to see and appreciate it. People see what I see, and it makes me smile that I don’t have to explain it to them.” 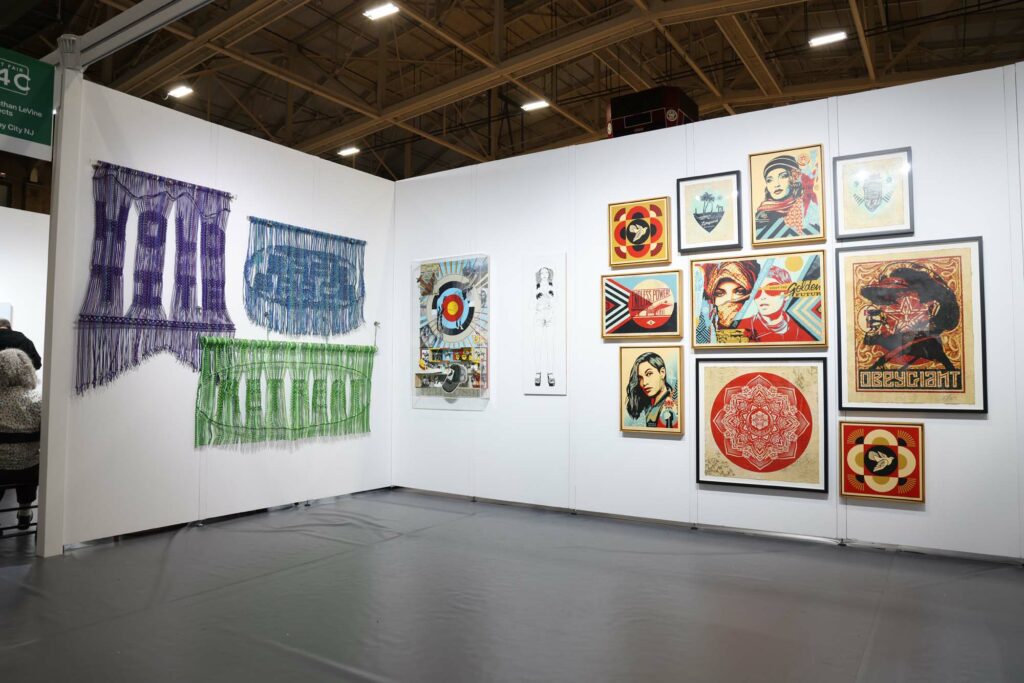 Also participating for the first time at 14C this year is art dealer Jonathan LeVine, a former Jersey City resident now residing in Rutherford who had a hand in creating the event with Holloway.

LeVine was the former coordinator of visual arts of Jersey City in the 1990s and used to be roommates with “Dancing” Tony Susco, who is known for putting together the Ghost of Uncle Joe every Halloween at the Historic Jersey City and Harsimus Cemetery and Grove Street’s Groove on Grove.

“This is me hanging out with my old community. It’s social and it’s stimulating,” says LeVine. “I’ve always kept a dialogue with the art community here since I got my start, and while I’m in in Rutherford I’m here quite a bit.”

When Holloway pulled together some of Jersey City’s galleries to do an art show, LeVine suggested they have the show at a hotel. The first Art Fair 14C would end up at the Hyatt Hotel in Downtown Jersey City when it debuted.

“It was easy to do it that way because I was used to doing hotel fairs when I first started out,” said LeVine. “But a lot of this is Robinson’s baby and she did a lot to make it happen.”

LeVine deals with street art and pop surrealism, working from the comfort of his own home online after closing his space before the pandemic began. He also had a former gallery space at Mana Contemporary. Some of the artists that he’s worked with include Ron English and Shepard Fairey. 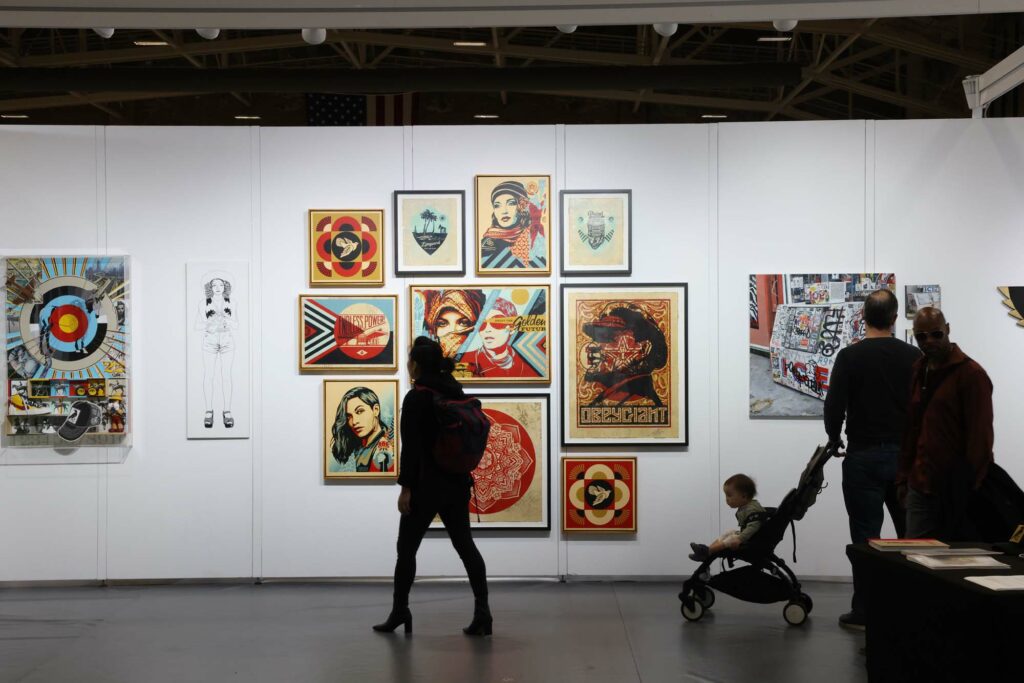 Other participating artists such as Patricia Pedraza from New York City does digital photography on her smartphone. She is currently exploring structure as seen in nature, whether it be botanicals or flowers, as well as in man-made constructs such as architecture and bridges. She then uses digital tools to find new and different ways to look at the original image, sometimes creating a kaleidoscopic event. She will have nine pieces on display at the show.

Pedraza is part of a group of artists being represented by the Venezuela Art Fair and Guaicora Studios. Also among that group is Melissa Schainker, who describes her work as figurative surrealism.

“I create work that is representational, but also distorts reality,” says Schainker. “The goal in this style is to depict both reality and the subconscious.”

This is Schainker’s first time participating in Art Fair 14C, with two works that explore grief and resilience. She has also exhibited at the Hamptons Art Market. She has lived in New York City for almost 10 years.

Smith launched his series Bundlehouse in 2005, which consisted of mixed media, assemblage, and sculptural works that focus on forced migration. He will be bringing the series to the fourth edition of 14C.

“Having Jersey City’s Nyugen E. Smith and his Bundlehouse series featured in our exhibition space reinforces this mission, ” said Kristin DeAngelis, director of community outreach at Mana. “It is an extraordinary opportunity for art collectors attending Art Fair 14C to engage in this stage of Nyugen’s rapidly advancing career.” 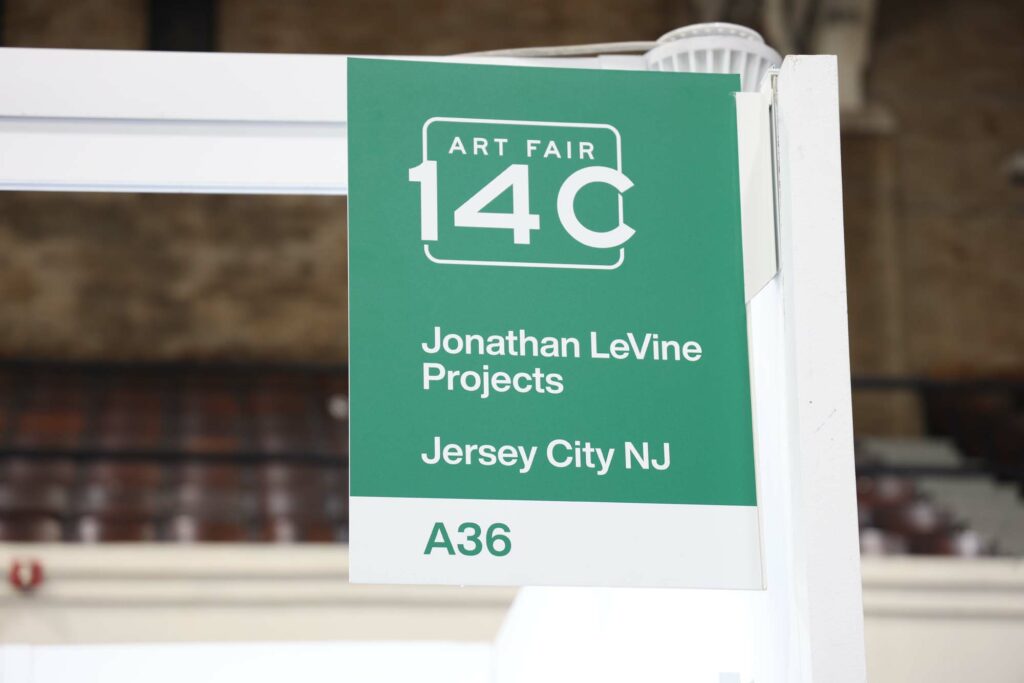 One of the additional themes for this year is a focus on veterans, and how fitting as the event begins on Veterans Day. Art Fair 14C recently collaborated with the Ivy Brown Gallery for its 4th Edition Art Fair to increase the visibility and inclusion of local veterans and military personnel.

Ivy Brown sponsored a special exhibit of artwork curated by veterans to raise visibility, understanding, and support of arts and health services for military personnel. Through this recognition, art allows veterans to develop social connections, provide hands-on activities, and acts as a form of creative therapy.

This year, Frontline Arts is partnering with 14C as they continue to focus on veterans in the arts. Frontline Arts is located in Branchburg and will have two veterans in attendance at this year’s event: Ron Erickson of Bogota, who does printmaking and paints; and Hoboken’s Jim Fallon, who some might know from his 2018 exhibition at the Hoboken Museum, “Heaven, Hell, and Hoboken.”

Frontline Arts has been providing veterans with an art program since 2011. They also travel across the state to meet veterans and spread their program at institutions such as the Montclair Art Museum, Stockton University, and Monmouth University.

Artists that are a part of the showcase receive lifetime attendance to Art Fair 14C along with exhibition and residency opportunities during the rest of the year.

Originally featured in The Jersey Journal